The NHRC directed the Mamata Banerjee-led govt to submit a detailed report within four weeks. 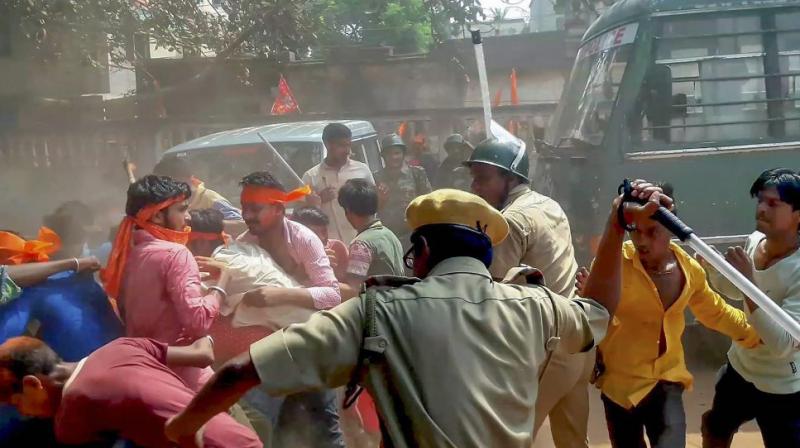 Kolkata: A day after a BJP central team's visit to the riot-hit areas of Asansol and Raniganj in Burdwan West, the National Human Rights Commission (NHRC) served a notice to Mamata Banerjee government on Monday taking 'suo motu cognisance' into the violence which broke out during the Ramnavami festival celebrations in the two industrial towns last week.

It has directed them to submit a detailed report within four weeks. The NHRC also ordered its director general (investigation) to depute a team headed by an officer not below the rank of senior superintendent of police (SSP) for "spot investigation" and sought for a report within next three weeks.

In a statement the NHRC said, "The National Human Rights Commission, NHRC has taken suo-motu cognizance of media reports alleging failure of the law enforcing agencies in protecting the right to life, liberty and dignity of the innocent people, who have become victims of violence in the Asansol- Raniganj area of West Bengal since 25th March, 2018. Many people have been forced to leave their houses. Several people have died; a police officer has also sustained grievous injuries in the violence and the situation is reported to be still out of control."

It added, "Expressing serious concern over the situation, the Commission has issued notices to the Chief Secretary, Home Secretary and Director General of Police, West Bengal calling for a detailed report in the matter within four weeks. The Commission has also asked its Director General (Investigation) to depute a team headed by an officer not below the rank of SSP to visit the disturbed areas of Asansol-Raniganj for spot investigation/ inquiry to assess the actual situation and submit a report within three weeks."

The NHRC statement elaborated, "According to the media reports, the people, who dialed 100 to seek police assistance, have stated that no police personnel came to help them. The unruly mob has destroyed the public and private properties. There are many families from different communities, as mentioned in the news report, who have lost everything in the ongoing violence. It is also stated in the news reports that according to many victims, the police just stood there for a while and then vanished when the crowd attacked the victims. Apart from this, people suffering from illness and pregnant ladies are the worst victims in the affected area."

It mentioned, "However, reportedly, the Commissioner of Police of Asansol has stated that the situation is under control and loud speakers are being used to spread awareness against the rumours and in the sensitive areas, large number of police personnel have been deployed."