India   All India  02 Apr 2018  Kejriwal, other AAP leaders apologise to Jaitley for calling him corrupt
India, All India

Kejriwal, other AAP leaders apologise to Jaitley for calling him corrupt

Along with Kejriwal, AAP leaders Sanjay Singh, Ashutosh and Raghav Chadha has also apologised to the Union minister.

In March, Arvind Kejriwal offered three such apologies to end his legal mess; the Delhi Chief Minister is named in more than 30 defamation suits. (Photo: PTI)

New Delhi: Aam Aadmi Party (AAP) convenor and Delhi Chief Minister Arvind Kejriwal, who is on an apology spree since last month, has apologised to Union Finance Minister Arun Jaitley who had sued him for defamation for calling him corrupt.

Along with Kejriwal, AAP leaders Sanjay Singh, Ashutosh and Raghav Chadha has also apologised to the Union minister.

The Union minister had asked for Rs 10 crore as damages after the AAP leaders accused him of corruption during his 13-year tenure as the boss of Delhi's cricket association DDCA (Delhi and District Cricket Association).

Jaitley had also filed a second case in 2017 after Kejriwal's lawyer Ram Jethmalani used a slur while cross-examining him and said the term had been authorised by his client.

In his letter to Arun Jaitley, Kejriwal said: "These allegations made by me were based on information and papers furnished to me by certain individuals who represented to have first- hand insight into the affairs of DDCA. However, I have recently discovered that the information and the imputations contained therein are unfounded and unwarranted and I was clearly misinformed into making these allegations."

Kejriwal further added, "I unequivocally withdraw all the allegations made by me in question whether made in print, electronic or social media against you (Arun Jaitley). I offer my sincere apology to you and your family members for any harm caused to your reputation as a consequence of my allegations."

In March, Arvind Kejriwal offered three such apologies to end his legal mess; the Delhi Chief Minister is named in more than 30 defamation suits.

Here is the copy of Arvind Kejriwal's apology letter to Arun Jaitley: 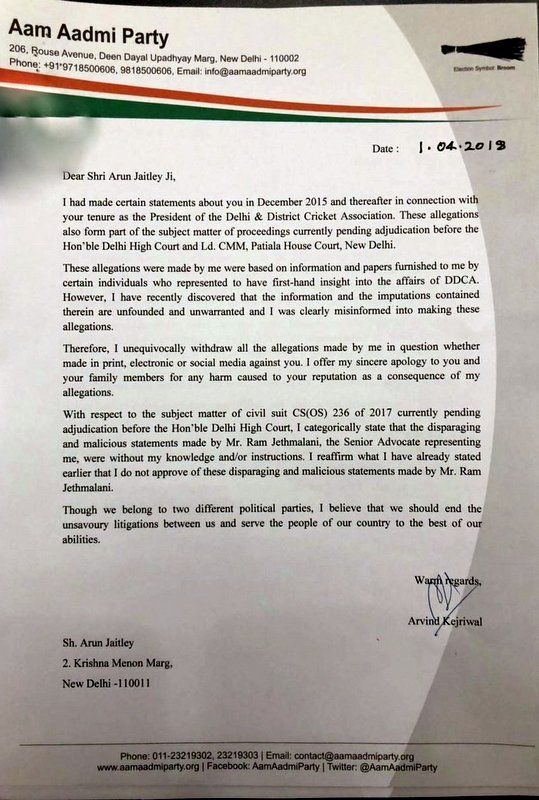