India   All India  02 Mar 2019  Navy, Army decide to call off operation in Meghalaya's mine tragedy
India, All India

Navy, Army decide to call off operation in Meghalaya's mine tragedy

Navy, Army informed local authorities about their decision to pack up and leave op on direction from their higher-ups, R Susngi said. 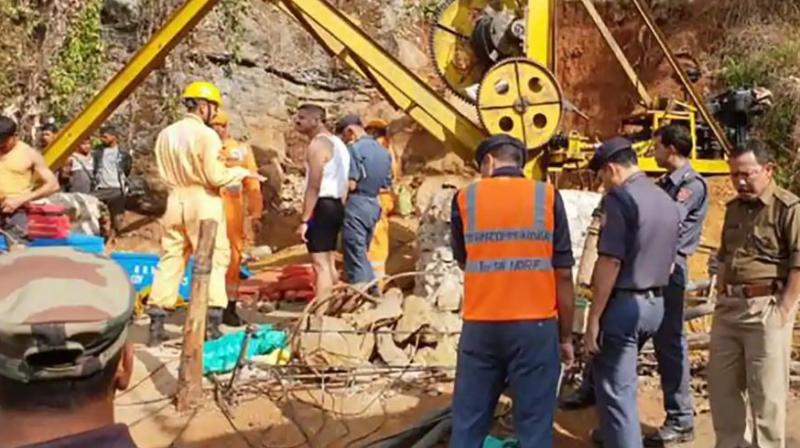 However, the National Disaster Response Force (NDRF), which has been engaged in the rescue operation since the day of the tragedy on December 13 last, will continue with their services. (Photo: AFP | File)

Shillong: A team of rescuers from the Navy and Army Friday announced to leave the operation site in Meghalaya's East Jaintia Hills district after 60 days of searching the 15 miners trapped in a 370 feet-deep illegal coal mine.

The Navy and the Army informed local authorities about their decision to pack up and leave the operation on direction from their higher-ups, operations spokesperson R Susngi said.

However, the National Disaster Response Force (NDRF), which has been engaged in the rescue operation since the day of the tragedy on December 13 last, will continue with their services.

"There is no instruction for us to wind up the operation and we will continue with our work," Santosh Singh, Assistant Commandant of Guwahati-based NDRF team, told PTI Friday from the site.

The Navy will be going back on Saturday, the operations spokesperson said, adding the Army will also pack up and leave on receiving a direction from the higher authority.

The Navy and Army personnel along with rescuers of the NDRF had so far detected five bodies deep inside the mine and retrieved two of them, officials said.

The Navy arrived at the accident site at Ksan area of Lumthari village on December 31 last and lately operated their underwater remotely operated vehicle (ROV) to search the holes 24/7.

The district authority congratulated and saluted the efforts, dedication and the tremendous contribution of the agencies in the two month-long rescue operation for the trapped miners at Ksan.

On Thursday, the second body was handed over to the relatives from Lumthari village, Susngi said. The highly decomposed body was identified by his family members from the clothes he wore, he said.

The companies involved in discharging water from the mines, including the Coal India Ltd, Kirloskar Brothers Ltd and KSB dewatered over 1 crore litres every day, he said.

The operation to rescue the miners is one of the longest in the country and involved multiple agencies, including the Navy, Army, NDRF among others.

The family members of each of the 15 miners have been given Rs 1 lakh interim relief each by the district authorities.

The mine disaster had shocked the nation. Media reports highlighted the cash-rich illegal coal mining in East Jaintia Hills district of Meghalaya in violation of a ban imposed by the National Green Tribunal in 2014.

The Supreme Court is monitoring the development and the rescue operations on a weekly basis.