A women’s empowerment component has also been woven in and the money from goat rearing is expected to go directly to the women. 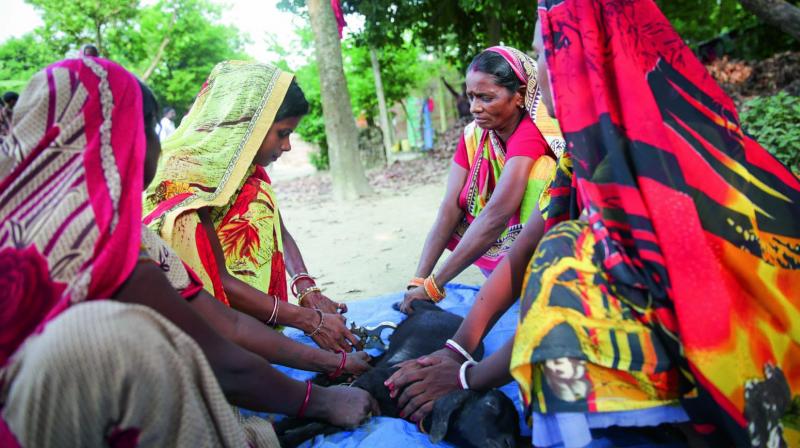 Poor local women in Bihar are being trained as Pashu Sakhis to care for goats and improve their production and productivity.

A new cadre of health workers, Pashu Sakhis, popularly known as bakri didis, are transforming the lives of poor rural women in four blocks of Muzaffarpur district of Bihar by improving the production and productivity of their goats. While the rich farmers invest in dairying, the marginalised have to make do with goats, often called the poor man’s cow.

The new importance given to the small, sturdy Black Bengal goat was visible in Shantipur village of Bochcha block. Raised goat sheds, kitchen gardens with a plot reserved for growing grass for them, large bowls filled with the nutritious green fodder azolla for improving the health and weight of the ruminants and tethered goats being taken for grazing reflect the new status they enjoy.

With Bihar having the third largest goat population in the country, Project Mesha (the Sanskrit name for a ram) is being implemented since mid-2016 by the Aga Khan Rural Support Programme (AKRSP) with funding from the Bill & Melinda Gates Foundation. In fact, this is the first livestock development programme being supported by the foundation in India. Spread over five years, the Mesha project intervention is in 351 villages of Muzaffarpur. With the support of the Bihar rural livelihood project JEEViKA, there are plans to upscale it to other districts.

Since 70 per cent of the landless in Bihar supplement their livelihood through goat rearing, this livestock development programme benefits the animals and the women who rear them. A women’s empowerment component has also been woven in and the money from goat rearing is expected to go directly to the women.

Self-Help Groups (SHGs) of those rearing goats are the nucleus for imparting new knowledge and skills in goat rearing as well as empowering women to reach out to the gram panchayats for their job cards and assert themselves in the family. The Pashu Sakhis were selected from the SHGs on the basis of their potential and interest in the work. Family consent is also sought since the Pashu Sakhis would be out of their homes for long hours for training and to tend to goats.

So far 107 women have been trained as Pashu Sakhis and another 143 are to be trained. Each Pashu Sakhi has the responsibility for the welfare of goats in about 200 households. Till Project Mesha was initiated there was a high mortality rate among young goats. In the absence of government veterinary support, women turned to the local, unqualified goat healers. Now there is growing confidence in the Pashu Sakhis who have been trained in three phases over 15 days. They deworm goats, vaccinate them, castrate young bucks, assist the SHGs to improve the feed of the goats and weigh them periodically so that a good price is assured.

Earlier, women sold the goats when they needed money or they felt it was sick and would die. Now, they have been trained to improve the weight and quality of the goat and sell around Holi and Id when goats are in demand and prices are good.

The Pashu Sakhis are initially supported by the AKRSP which provides various tools of their trade like the brudizzo or castrator, the weighing scales as well as Rs 1,500 a month — Rs 750 as their stipend and an equal amount for doing various jobs like vaccination, deworming, etc. In the second year they get the stipend and are supposed to be paid per service by the goat owner. In the third year they are entirely on their own earning per service provided. So for a vaccination a Pashu Sakhi charges Rs 8 of which Rs 5 is the cost of vaccine and Rs 3 her service charge. Similarly, she earns money for deworming. Their largest earning is from castration — Rs 50 per buck.

Pashu Sakhi Sheela Devi of Shantipur village, who was in the first batch trained in August 2016, has done 150 castrations and says with pride “not a single buck fell ill or bled”. Earlier, castration was done by men using a knife. This sometimes resulted in toxemia or the animal bled. “Respect for me has increased in the village after I became a Pashu Sakhi. Now people come to me for advice,” she says. Ragini Devi, another Pashu Sakhi, was thrilled to meet chief minister Nitish Kumar at an orientation meeting at Jharan. Almost 15 per cent of the Pashu Sakhis are from the minority community and at Sakhra village where there was some resistance to women doing the castration there was a fear that the castrated qurbani bakri (sacrificial goat) may not sell. Fortunately, the Maulvi spoke to the community and the role of women as well as bloodless castration was accepted.

At Rohua Birnarayaan village, Mushahri block, feisty Munna Devi reflected the changing face of the Pashu Sakhis. With 300 households and 900 goats under her care for a year and a half, she was confident as well as articulate. When the Mahila Samakhya programme that she was working with folded up, she was bored and desperate for a job. However, she admits that her role as a Pashu Sakhi was tough initially. Catching goats and giving them injections was a new experience. “My hands were trembling when I held the syringe for the first time, but with each training session I attended my confidence and dexterity increased,” she says. “I have given over 60 injections in the last year and a half and don’t hesitate to visit a home at dead of night if a goat is ill”. Though not trained for dealing with fractures, having watched vets putting splints, she was able to set right a fracture.

With four to six goats of their own and their earning as Pashu Sakhis, the women are earning anything from Rs 1,500 to Rs 5,000 a month. In the coming years Munni Devi is confident her earnings could soar to Rs 10,000 a month. After becoming a Pashu Sakhi, Munni Devi has bought and registered one kattha of land in her name and constructed a house.

Earnings of the goat rearing women have also increased. With the construction of raised bamboo and thatch goat sheds instead of the urine drenched bhussa or grass, goats are healthier and the mortality rate has dropped. Goats are fed a nutritious mix of wheat and oil cake residue, green fodder azolla and kitchen garden remnants. Many of the women are making the mixture and selling it to others at Rs 125 for five kg. In the monsoons, the goats are not allowed to wade into water bodies from which they can contract liver flu and other infections. The goats are healthier and fatter. Earlier buyers would guess the weight of a goat and pay less. Now after being weighed on scales, a goat earlier sold for Rs 7,500 is now fetching Rs 12,000 to Rs 13,000. Most women have a minimum of three goats but some have six to eight goats. The Black Bengal goat breed of Bihar, though small in size, has two to three kids at a time as against the one kid produced by the bigger Jamunapari and Sirohi goats of Uttar Pradesh and Rajasthan respectively. The meat quality of the Black Bengal goats is good and its skin can be used as high quality leather.

As a part of the upscaling of Mesha project, a study on breed improvement is being conducted by Nimkar Agriculture Research Institute, Pune, and support provided by AbacusBio, New Zealand, an international leader in agribusiness. Also on the cards are improvement of the goat chain value and marketing.