Director of school education Rajeev Trajan said that teaching work in the schools, which reopened on Wednesday, would start on March 3. 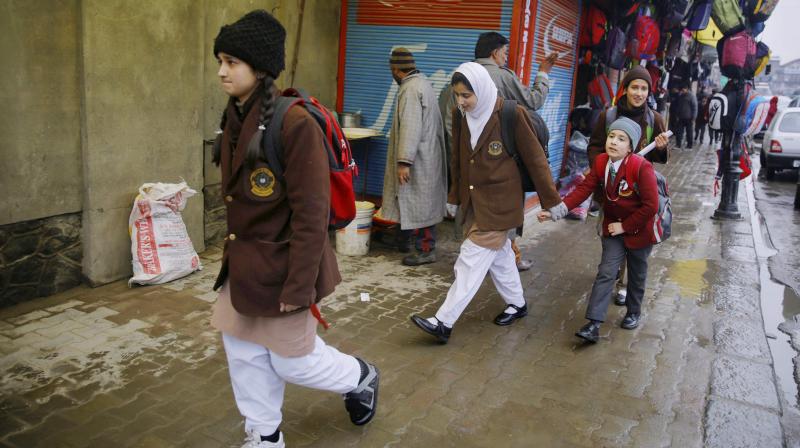 Students walking in Srinagar on Wednesday for school which re-opned after a three-month winter break. (Photo: PTI)

Srinagar: Schools reopened in Kashmir on Wednesday after a gap of nine months, which included a three-month winter break and a period of unrest last summer triggered by Hizbul Mujahideen commander Burhan Wani’s killing. Also, over thirty schools across the Valley were burnt during the unrest.

Despite the hostile atmosphere and stiff opposition from sections of the local population and political leadership, particularly separatists, authorities conducted the annual board examinations under unprecedented security in November-December last year. Yet it turned into a political issue with the BJP government at the Centre terming the overwhelming participation of the students in these exmas a powerful “surgical strike” against separatist militants.

While students in colourful uniforms headed for schools in Srinagar and most other parts of the Valley on Wednesday morning, the state government has extended winter vacations in areas are still snowbound till March 12.

Director of school education Rajeev Trajan said that teaching work in the schools, which reopened on Wednesday, would start on March 3. On March 1 and 2, the students would be asked to share their experiences of winter schooling, he said.