A bond that’s getting closer: 25 years of India-Israel ties

High-level government visits between the two countries have also taken place during the current tenure of the Modi government. 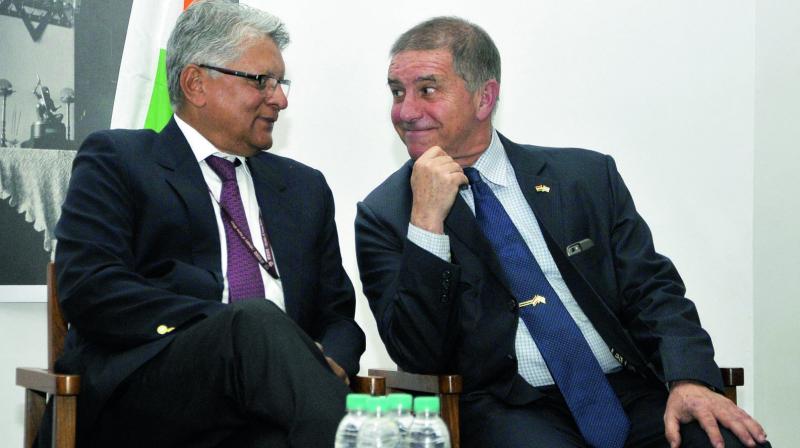 Secretary for economic relations Amar Sinha (right) with Israeli ambassador to India Daniel Carmon after unveiling a logo of 25 years of India-Israel diplomatic relations at a function in New Delhi. (Photo: Pritam Bandyopadhyay)

New Delhi: In November last year, when Israeli President Reuven Rivlin visited India, Prime Minister Narendra Modi while speaking in his presence had commented, “As fellow democracies, our people are our biggest strength and the biggest beneficiaries of a strong India-Israel partnership. The 2000-year-old Jewish community in India represents a thriving link to this past. Today, it is a vital part of our composite cultural mosaic that continues to thrive in their traditions. We are proud of the Jewish community in India.” Mr Modi had further said, “Two and a half decades of our friendship has brought rich dividends for both our nations. It has also strengthened voices of peace, stability and democracy globally.” Mr Modi will himself be visiting Israel this summer, in what will be a keenly-watched visit. Israeli Prime Minister Benjamin Netanyahu is also likely to visit India by the end of this year. The two nations on Tuesday unveiled a logo in the capital to mark 25 years of diplomatic ties.

For two countries that began their journeys as independent democracies at roughly about the same time and being two ancient civilisations — the Indian and Jewish, it may come as a surprise to many on why full-fledged diplomatic ties were established just 25 years ago. Much of it has to do with the paths the two countries chose about the middle of the 20th century. India had attained Independence in 1947 after a painful Partition wherein Pakistan was carved out on the basis of religion. In the Middle East, a year later in 1948, Israel was formed as a Jewish state, which the Jawaharlal Nehru government recognised in 1950. But India’s strong and vocal support to the Palestinian cause ensured that Indo-Israeli ties were frosty. The Cold War between the US and the then USSR also had a role to play in this. New Delhi, though a member of the Non-Aligned Movement, had a rather pronounced pro-Soviet tilt in its foreign policy while Israel remained a strong ally of the United States. Nevertheless, the Nehru government permitted Israel to open a consulate in Mumbai in 1953 where consular services were offered. There was then a large Indian Jewish community both in Mumbai and Kochi, Kerala, from where many Jews wished to emigrate to Israel.

During the 1950s, 60s, 70s and 80s, Indo-Israeli diplomatic contacts remained minimal while ties between India and the Arab world flourished. But things began to change in the early 1990s. The insurgency in Kashmir fuelled by Pakistan meant that some of the countries in the Islamic world began to sharply criticise New Delhi. It was then that public opinion began to grow in favour of stronger ties with Israel. At about the same time, from 1989-91, the right-wing BJP — that now rules India and which was until then a small player on the national political scene — began to make huge electoral gains and also argued vocally for strong ties with the Jewish state. In that milieu, it was the Congress government at the Centre led by P.V. Narasimha Rao that took the gigantic foreign policy leap of establishing full-fledged diplomatic ties with Israel on January 29, 1992. But at the turn of the century, during the earlier NDA government led by Atal Behari Vajpayee, the ties really began to take off. In 2003, then Israeli PM Ariel Sharon visited India in a landmark visit.

The most significant aspect of ties at this time was the start of the defence cooperation between the two countries that has seen India acquire weaponry and defence equipment from Israel worth billions of dollars in the past 15 years. The cooperation includes weaponry and platforms such as surface-to-air precision-missiles, anti-tank guided missiles, drones and sophisticated avionics systems for India’s “eye in the sky” AWACS. But given the strategic nature of the acquisitions, it’s one aspect that the Israelis refuse to discuss publicly.

But there are other aspects to the ties as well. As Mr Modi himself put it last November: “We are familiar with Israel’s advances in agriculture, and its expertise in micro-irrigation in drought-prone areas and water management. We have identified water management and conservation, and collaboration in scientific research and development as two areas of priority engagement... Israeli companies can scale up their tie-ups with our flagship schemes of Make in India, Digital India, Skill India and Smart Cities... Indian and Israeli companies can also work together in high-technology manufacturing, and services sectors... and as President Rivlin told me in our discussion, Make with India can generate jobs and benefit both geographies... IT service is an area where our partnership can make a difference for both our economies.” The two sides had also inked two pacts to strengthen cooperation in agriculture and water resources management.

During this visit last November, India and Israel also decided to “broad-base” their already close defence partnership and agreed to intensify cooperation in combating radicalism and extremism while calling for tough global action against terror networks and states harbouring them. Both countries have suffered the scourge of terrorism, sometimes jointly. During the horrific 26/11 Mumbai terror attacks in November 2008, carried out by Pakistani terrorists, a Jewish Centre was also attacked and an Israeli couple was killed there. A few years later, in February 2012, a terrorist suspected to be from a West Asian country, attacked the vehicle of the wife of an Israeli diplomat in New Delhi, injuring her, before fleeing the scene. After the Indian Army’s surgical strikes on terror launchpads in PoK last year, Mr Modi was quoted in October 2016, as saying in Himachal Pradesh, “Our Army’s valour is being discussed across the country these days. We used to hear earlier that Israel has done this. The nation has seen that the Indian Army is no less than anybody.” The comment underlined Mr Modi’s personal admiration for the achievements of the Jewish state, particularly in fighting against terror.

High-level government visits between the two countries have also taken place during the current tenure of the Modi government. Israeli defence minister Moshe Ya’alon visited India in February 2015, while external affairs minister Sushma Swaraj visited the Jewish state in January 2016. But more importantly, the close nature of ties was seen again when India in July 2015 abstained from voting on resolutions at the UN in Geneva, which supported a probe by the International Criminal Court against Israel for alleged war crimes in Gaza. However, in an obvious balancing act, India had argued that “there is no change in New Delhi’s long-standing position on support to the Palestinian cause”, with New Delhi claiming India’s continued “political, diplomatic and developmental support to Palestine”.