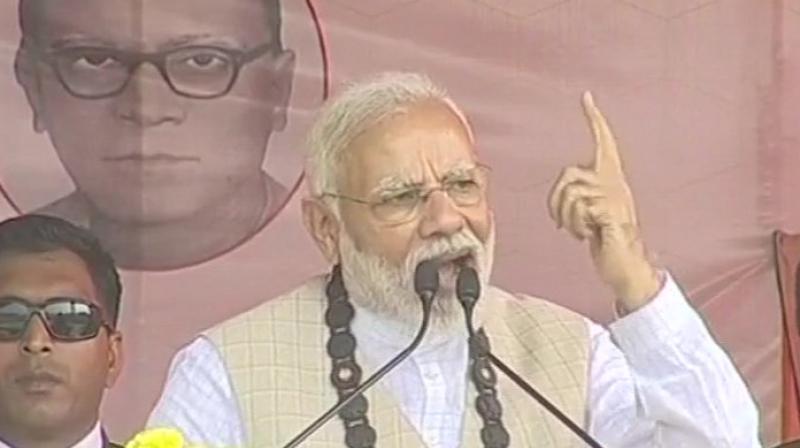 Thakurnagar: Kickstarting his poll campaign in West Bengal, Prime Minister Narendra Modi on Saturday enthused by the large turnout, couldn't resist taking a jibe at Mamata Banerjee stating that he now understood why the Chief Minister had to resort to violence in the state.

"I saw the crowd and thought this is the reason why didi resorts to violence. Thank you for turning out in large number. Those who advertise to be democratic kill innocent people" the Prime Minister said

While addressing a public rally in Thakurnagar, PM Modi said, “This is just the beginning, the main budget after Lok Sabha election will have much more for the youth, farmers, and other sections of the society.”

“It is extremely unfortunate that the villages of West Bengal have not been given enough attention even after so many decades of independence. Leaders have not focused on the development of rural areas. New India cannot function in this way. The central government is making every effort for the past 4.5 years for the development of farmers and agricultural labourers,” he said.

"After Independence, many people stayed where they were. But after being tortured, they left and came back to India. They had to as Hindus, Sikhs, Parsis and Christians have nowhere else to go but India. And that's why we are bringing the citizenship law. I urge the Trinamool to support it in parliament. My brothers and sisters here need it," the PM said.

Lauding the budget which was presented by Finance Minister Piyush Goyal on Friday, he assured people that the same is for the benefit of common man, small farmers, labourers, and people of the working class.

The PM will next address a rally in Durgapur, which will be a part of the BJP's 'Ganatantra Bachao' (save democracy) programme in the state.