He added that the Budget paid special attention to the middle class, farmers, workers in the unorganised sector. 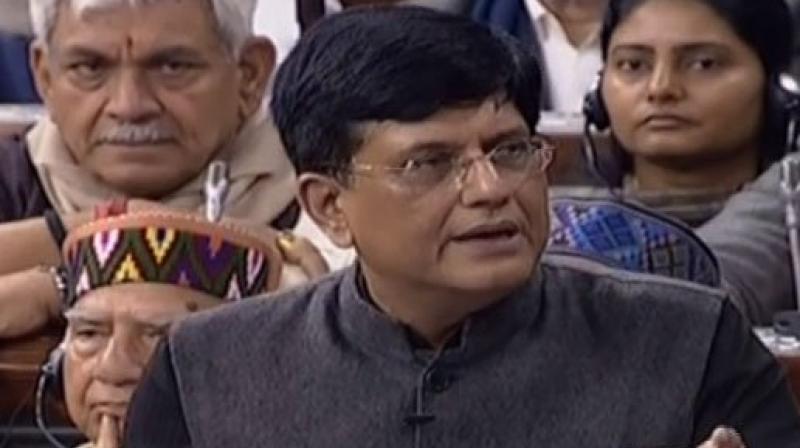 New Delhi: In its last Budget before the nation goes to the polls to decide whether or not to give a thumbs-up to the Narendra Modi government’s track record, interim finance minister Piyush Goyal on Friday used his speech to make a pitch for the “New India”, as he claimed that development had become a “mass movement” under the NDA, which would “transform India into a leading nation of the world with the help of our people”.

Mr Goyal said the interm Budget highlights the “vision and way forward” to make India a “$10 trillion economy by 2030”, with the “comprehensive 10-dimensional vision” presented in his speech.

While the Budget is yet to be assessed in detail by stakeholders, most BJP MPs welcomed it by chanting “Modi, Modi” at the fag end of Mr Goyal’s speech as he asserted the “transformation” seen in the country was “because of the passion of the people of our nation”, and declared the NDA had given “decisive leadership, whose intent is clear, policy is transparent and integrity is resolute”.

The ruling BJP is yet to officially declare its poll slogan for the coming Lok Sabha polls, but various wings of the party have launched slogans like “#ModiOnceMore”, “Kaho dil se”, “Modi phir se” and “Ab ki baar 400 paar” — for a second term for Mr Modi’s NDA government.

“The people of India gave a strong mandate to our government. Under the visionary leadership of Prime Minister Narendra Modi, we have given the most decisive, stable and clean government, and have undertaken transformational structural reforms... I can proudly say India is solidly back on track and marching towards growth and prosperity. We have prepared the foundation for sustainable growth, progress and a better quality of life for all our people,” said Mr Goyal in his Budget speech, adding that the country was moving towards “realising a New India by 2022”, when it celebrates 75 years of Independence. Citing the many achievements of the Modi government’s flagship programmes, Mr Goyal promised farmers’ income being doubled, youth and women getting “ample opportunities to fulfil their dreams”, and a India “free from terrorism, communalism, casteism, corruption and nepotism”.

Despite the farmers’ unrest and a dip in the jobs sector giving the ruling BJP a major headache, BJP president Amit Shah hailed the Budget for “benefiting” all sections of society, and said it proved the Modi government was dedicated to the aspirations of the country’s youth, the poor and farmers. Even Sangh Parivar affiliates like the Swadeshi Jagran Manch and Bharatiya Mazdoor Sangh called the Budget “pro-people” and “a step towards ensuring universal basic income”, despite the general feedback reaching the RSS suggesting that it would be a very tough fight for the Narendra Modi-led NDA, unlike in 2014. However, if the much-hyped Opposition unity moves and the proposed “grand alliance” to take on the Modi-led NDA remains a non-starter, the “NaMO magic” could still work for the BJP and the NDA.

Echoing Mr Goyal’s views, home minister Rajnath Singh said the Budget would accelerate the process of creating a “New India”, which was “confident, self-reliant, developed and prosperous” and said that the Budget was “development-friendly”. He added that the Budget paid special attention to the middle class, farmers, workers in the unorganised sector and other vulnerable sections of society.

BJP president Amit Shah claimed the Budget will “spur growth, generate employment and also provide relief to the middle class, farmers and poor workers, among others”. Hailing it, Mr Shah said it benefited all sections of society and “has proved that the Modi government is dedicated to the aspirations of the country’s youth, farmers and poor”.

Complimenting Mr Goyal for delivering an “excellent pro-farmer, pro-poor Budget”, Union minister Arun Jaitley said it will also strengthen the purchasing power of the middle class”. Mr Goyal was given temporary charge of the finance ministry after Mr Jaitley went for medical treatment in New York. The middle class had played a key role, along with young people, to bring the BJP to power in 2014 with a thumping majority.