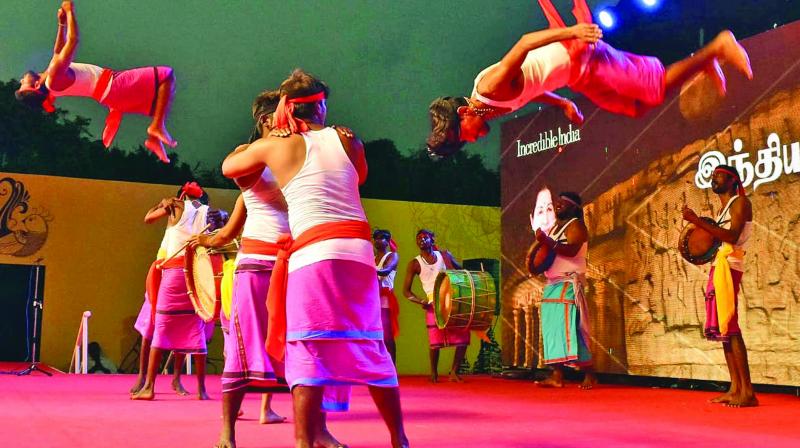 CHENNAI: Though Tamil Nadu’s filter coffee and piping hot idlies and vadas are popular, it sometimes needs a 'brand' ambassador to effectively “market” its culture to lure overseas visitors, it seems. This is perhaps what Prime Minister Narendra Modi attempted to accomplish when he donned a dhoti and an angavastram to receive Chinese President Xi Jinping at the coastal heritage town of Mamallapuram.

Modi-Xi holding the hands together with the rock-cut sculptures in the background, is perhaps the most fascinating photos of the year. As 2019 fades, it has raised the necessity for Tamil Nadu tourism to have its own cultural ambassador and also be more aggressive on the social media to tap the potential.

Recalling the Tamil attire of Modi and the ‘Mamallapuram’ diplomacy, Chief Minister Edappadi K. Palaniswami, remarked that their visit has given impetus to the tourism activity in the UNESCO declared world heritage town. “The number of tourists to Mamallapuram has increased after their informal summit there,” he claimed.

True to his saying, Mamallapuram, which was a short haul excursion for Chennaiites, has since the October summit (which has helped to beautify the place ahead of the Modi-Xi visit) has been a ‘hotspot.’ The summit has also made the department focus its attention on heritage sites across Tamil Nadu and promote development in a big way. Tourism minister Vellamandi N. Natarajan is concentrating more on improving the infrastructure.

Despite the not-so-high-profile campaign blitzkrieg, Tamil Nadu on its own succeeded to retain its position as number one in the country in terms of attracting domestic and foreign tourists, for the fifth consecutive year. The State had the highest tourist arrival from 2014 to 2017 and in 2018, 39 crore domestic and 61 lakh foreign tourists visited Tamil Nadu.

Infrastructure is another area, which merits attention. Hitherto, the tourism department has been taking up works in association with Hindu Religious and Charitable Endowments department, district administration or town panchayats. On its own, it has not taken up any major tourism projects to boast of except the Centrally sponsored projects like the PRASAD (Pilgrimage Rejuvenation and Spiritual Augmentation Drive) for development of Kancheepuram and Velankanni besides the Swadesh Darshan Scheme to develop theme based tourist circuits on the principles of high tourist value of all stakeholders to enrich tourist experience and enhance employment opportunities.

Tamil Nadu single-handedly accounted for around 21 per cent of the total tourist visitations to all States in 2018, chiefly due to pilgrimage tourism, attracting tourists from neighbouring States to its temples. The UNESCO-declared world heritage sites, such as Shore Temple, Iravatheeswarar Temple in Darasuram and Brahadeeswarar Temple in

The state sprung a surprise this year after its ranking oscillated from number 1 in 2009 to number 4 in 2017, and now to no. 2 in 2018. The state came in second by displacing Maharashtra and Delhi in 2019. This can be primarily attributed to an improvement in Tamil Nadu's performance in effectiveness of marketing campaign, aircraft movement and ease of doing business. Moreover, the state outshines its peers in terms of tourist visits, consistently ranking first across editions - mainly due to it being a popular pilgrimage destination, says India State Ranking Survey by Hotelivate in association with the World Travel and Tourism Council - India Initiative (WTTCII), in the biennial
publication that assesses the relative competitiveness of the nation’s 30 States in terms of Travel & Tourism potential across 12 identified parameters. This is the sixth edition of the publication since its inception in 2009.

The other major parameters where the state performs relatively well and ranks in the top 10 are presence of branded hotel rooms, GSDP per capita, urbanisation, road and rail infrastructure, aircraft movement and literacy rate. On the flip side, Tamil Nadu continues to rest at the bottom of the rankings for expenditure on tourism.