15 miners are still trapped inside an illegal coal mine in East Jaintia Hills district of Meghalaya since December 13. 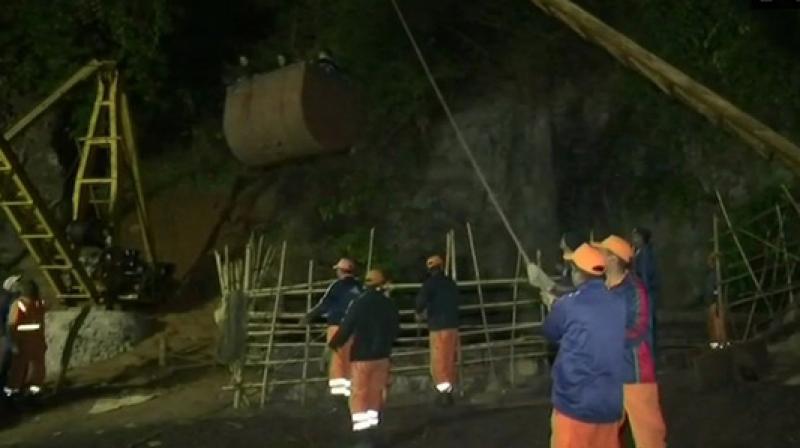 The rat-hole mine, located on top of a hillock fully covered with trees in East Jaintia Hills district, had got flooded when water from the nearby Lytein river gushed into it, trapping the miners. (Photo: ANI)

New Delhi: The Supreme Court on Wednesday agreed to hear on Thursday a plea seeking urgent steps to rescue 15 miners trapped inside an illegal coal mine in Meghalaya since December 13.

The matter was mentioned for urgent listing before a bench comprising Chief Justice Ranjan Gogoi and Justice S K Kaul. The PIL filed by Aditya N Prasad also sought a direction to the Centre and other authorities concerned to prepare a Standard Operating Procedure (SOP) for rescue operations in mining.

The rat-hole mine, located on top of a hillock fully covered with trees in East Jaintia Hills district, had got flooded when water from the nearby Lytein river gushed into it, trapping the miners.

The horizontal tunnels are often termed "rat holes" as each just about fits one person.

The National Disaster Response Force (NDRF) had on Thursday contradicted media reports which quoted it as saying the trapped minors were suspected to be dead on the basis of a foul odour that the force's divers had encountered when they went inside the mine.

It had said the foul smell could be due to the stagnant water in the mine as pumping had been halted for more than 48 hours.

A survivor of the accident said on Saturday there was no way the trapped miners would come out alive. Family members of at least seven trapped miners had already given up hope to rescue them alive and requested the government to retrieve the bodies for last rites.