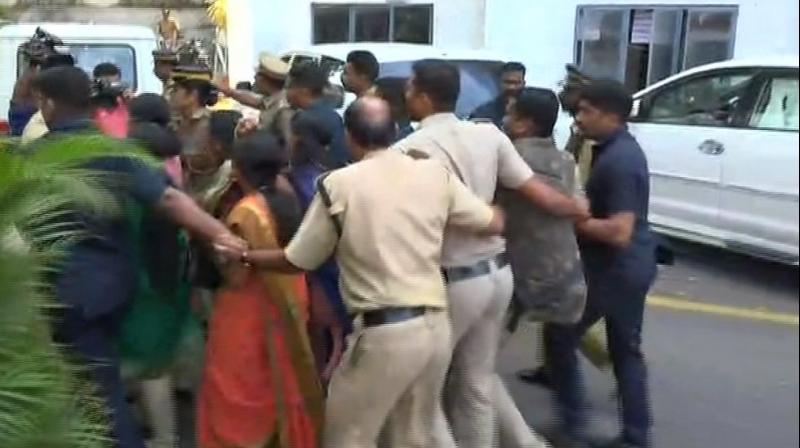 Thiruvananthapuram/Kottayam: An umbrella organisation of various pro-Hindutva groups have called for a state-wide shutdown Thursday, amid protests at several places after entry of two women into the Lord Ayyappa temple at Sabarimala.

As the news of the women entering the temple spread, protests erupted with right-wing activists blocking highways and forcing closure of shops and markets. Media personnel, reporting from outside the state secretariat, were allegedly attacked by BJP and Yuva Morcha activists.

Announcing the dawn-to-dusk shutdown on behalf of the Sabarimala Karma Samiti Samiti, its leader K P Sasikala said the government has betrayed devotees.

The Samiti, which is spearheading protests against the Supreme Court's September 28 verdict allowing women of all age groups to offer prayers at the hill shrine, urged people to cooperate with them in their protest.

Sasikala said the protests would continue till Pinarayi Vijayan resigns as chief minister.

Scripting history, two women who are in their 40s entered the Ayyappa temple early Wednesday and offered prayers.

Sasikala said the government acted like a "coward" and took the women to the shrine during the early hours.

Among the journalists attacked were Asianet reporter Prakula, Deccan Chronicle photojournalist Peethambaran Payyeri, Mathrubhumi video-journalist Biju. Camera and equipment of channels like Mathrubhumi and Media One were also damaged. The Kerala Union of Working Journalists' flayed the attack on the media personnel and sought stern action.

This is the seventh shutdown called by right-wing groups in just three months over the Sabarimala issue.

Traders' organisations have said they will not cooperate with the shutdown and sought police protection to open their establishments.

On December 20, over 35 trade organisations in Kerala had come together to announce that 2019 will be 'anti-hartal year'.

The Antharashtriya Hindu Parishad has also called for a hartal Thursday.

The Nair Service Society, an outfit of Kerala's forward Nair community, condemned the violation of Sabarimala's centuries-old tradition and said it would continue its legal battle to protect the faith of Ayyappa devotees.

NSS, which has filed a review plea in the Supreme Court challenging its verdict, expressed hope that the top court would take a favourable decision. The top court will consider the review plea on January 22.

Addressing a meeting of NSS members on the occasion of the Mannam Jayanti celebrations at its headquarters in Changanassery near Kottayam, NSS general secretary G Sukumaran Nair said it would approach the Centre if the apex court rejects its plea.

"We will continue our legal battle," he said. "If there is a divine intervention, definitely, the verdict will be in favour of us," Nair added.

An ordinance is the only other way out if the top court rejects the plea seeking review of its earlier verdict, he said.

The Supreme Court had refused to stay its verdict allowing entry of women of all age groups into the shrine, but agreed to hear in open court on January 22 a batch of review petitions in the matter.

Nair supported the decision taken by the chief priest of the temple to perform a 'purification' ceremony after the two women entered the shrine and offered prayers, violating the tradition of the temple.

In view of the severe damage to the sector in the floods causing huge revenue loss, the tourism industry will function as usual during the shutdown, a statement issued by the representatives said.

They urged the government, political parties, other organisations and public to cooperate for the smooth functioning of the tourism sector.