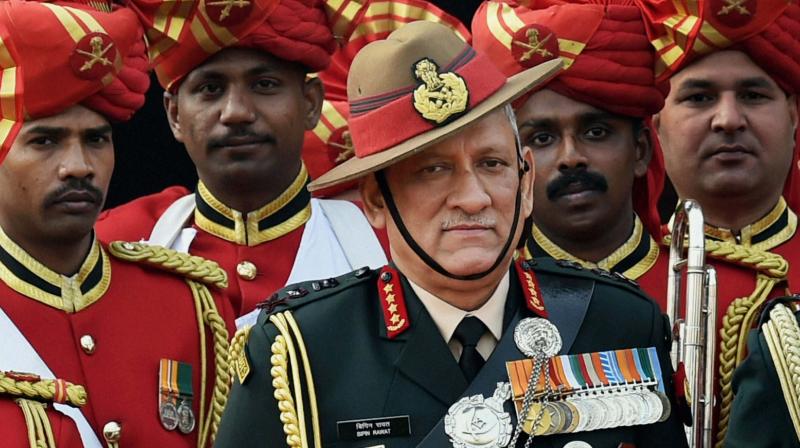 New Delhi: General Bipin Rawat, who has taken charge as the new Army Chief, said on Sunday that while the role of the force is to maintain peace and tranquillity at the borders, it will not “shy away from flexing its muscle, if need be”. The Army Chief also maintained that both the Eastern Army commander Lt. Gen. Praveen Bakshi and Southern commander Lt. Gen. P.M. Hariz, whom he superseded, will complete their tenure in the force.

“Our country, our Army wants peace and tranquillity at the border. But that does not mean we are weak. We are capable and powerful in all forms and, if need be, we will not shy away from using our power in any form. Our aim is that peace is maintained at the border. But I will say it again, that if need be, we will not hesitate in using our power,” Gen. Rawat said after reviewing the Guard of Honour at South Block here.

Last year witnessed regular ceasefire violations by Pakistan along the Line of Control and terror attacks in which the Indian Army lost as many as 60 soldiers. The worst came on September 18, when four militants attacked an Indian Army brigade headquarters in Uri, leaving 19 soldiers dead. India responded with surgical strikes on September 29.

Gen. Rawat, who succeeds Gen Dalbir Singh Suhag as the 27th Chief of the 1.3 million strong Indian Army, has vast experience in high-altitude warfare and counter insurgency operations. He commanded an infantry battalion along LoC in the Eastern sector; a Rashtriya Rifles sector and an infantry division in the Kashmir Valley.

“I respect the officers who have been superseded. They have worked with me shoulder-to-shoulder and I can say for certain that they will continue to work shoulder-to-shoulder to keep the unity and power of the Army in the future also,” he told reporters when asked to comment on the controversy.

Lt. Gen. Bakshi on Saturday announced “full support” to the new Chief and said that he will continue to lead with full professional sincerity.

“I am fully conscious of my responsibility to the rank and file of the Army. Every individual, every soldier in the Army counts, irrespective of the arms and service he belongs to because it is the contribution of every soldier that makes the Army efficient and strong,” the new Chief said.

The new Army Chief said that the force will take all possible care of veterans, “veer naris”, widows and those who have been disabled in the line of duty.