Mulayam was accompanied by close aides Amar Singh and Shivpal Yadav to the Election Commission’s office. 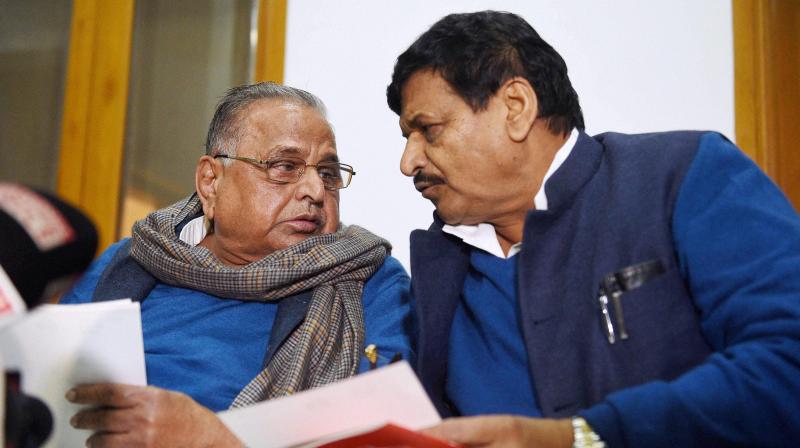 Mulayam was accompanied by close aides Amar Singh and Shivpal Yadav, who had reached Delhi to fine tune the strategy to ensure that the symbol remains with them ahead of assembly polls in the state.

"Cycle symbol is ours," asserted Mulayam earlier on Monday and asked party cadres to focus on winning the assembly elections likely to be announced any day now.

Mulayam, who postponed the SP convention scheduled in Lucknow on January 5, said, "No one can accuse me of wrongdoing. I have never indulged in corruption or betrayed anyone. Cycle symbol is ours."

Chief Minister Akhilesh Yadav, who on Sundday sought to take control over the SP, remained closeted with his confidants and is expected to meet party leaders and legislators at this residence in Lucknow.

Sources said Ram Gopal might represent Akhilesh when he takes up the symbol issue with the EC.

In a series of tweets, SP leader Shivpal Yadav, the warring uncle of Akhilesh, maintained that Mulayam is the SP national president even now.

Shivpal gave no reasons for the abrupt postponement of the party convention, but insiders said perhaps the Mulayam camp was apprehensive of a poor turnout compared to the massive gathering at the "convention" held by Ram Gopal Yadav on Sunday. The convention was declared illegal and unconstitutional by Mulayam.

The Samajwadi Party on Sunday split down the middle with the faction headed by Chief Minister Akhilesh removing Mulayam as party chief and appointing him in his place at a convention in which the group claimed support of the majority of legislators and district units.

The two sides had engaged in mutual recriminatory expulsions with the convention called by Ram Gopal removing Akhilesh's warring uncle Shivpal as state party chief, and showing the door to "outsider" Amar Singh, who has been blamed for the feud in the Yadav clan.

Mulayam had retorted by again expelling his cousin Ram Gopal for six years along with national vice president Kiranmoy Nanda, who chaired the convention, and general secretary Naresh Agarwal for taking part in it.