Around 63 per cent of voting was recorded for the 13 Assembly seats that went to polls in the first phase of voting on Saturday. 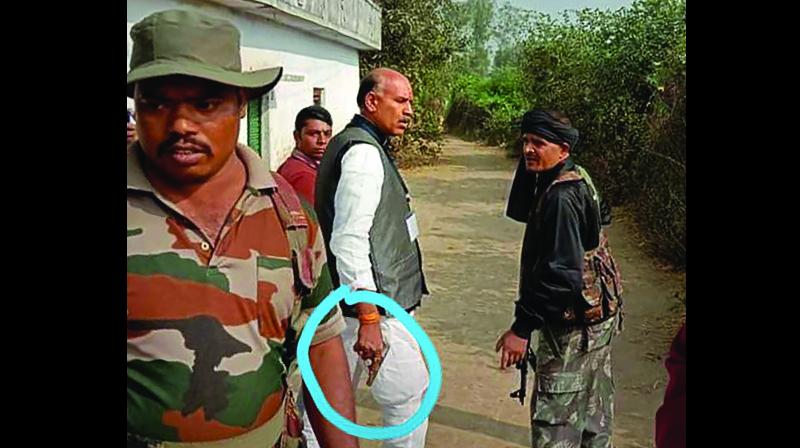 Patna: Two major incidents of violence were reported during the first phase of polling in Jharkhand Saturday. Congress candidate Krishna Nand Tripathi was seen flashing a gun outside a booth during polling.

Clashes erupted between the Congress and BJP supporters in Kosiyara village in the Daltonganj Assembly constituency. Mr Tripathi — who was detained for questioning and later released —accused BJP nominee Alok Chaurasia and his supporters for trying to disrupt the electoral process in the area.

Meanwhile, the Election Commission (ECI) asked the district administration to submit a report on the incident.

According to sources from Ranchi, Mr Tripathi’s weapon was seized and a probe has been initiated by the police into the incident.

Around 63 per cent of voting was recorded for the 13 Assembly seats that went to polls in the first phase of voting on Saturday.

In another incident of violence, Naxals tried to create disturbance in Gumla by blowing up a bridge in the Bishunpur area immediately after voting began Saturday.

According to the district administration, “No casualty was reported and the voting process was also not disrupted due to Naxal violence.”

Around 63 per cent voting was recorded in the 13 Assembly seats (Jharkhand) that went to polls in the first phase of voting Saturday. BJP was locked in a tough electoral battle with the JMM-led grand alliance. Key candidates in the fray were BJP candidate and health minister Ram Chandra Chandravashi from the Bisrampur seat and Congress state president Rameshwar Oraon from Lohardaga.

As many as 189 candidates were in the fray in the first phase. The ruling BJP is contesting from 12 seats and supporting an independent nominee from the Hussainabad seat.

The Opposition Congress fielded candidates in six constituencies, the JMM in four, and the RJD in three seats. The All Jharkhand Students Union (AJSU) which had contested in alliance with the BJP in 2014 is contesting alone on three seats.