Bhagwat was speaking in response to the case where a Hyderabad vet was raped and murdered. 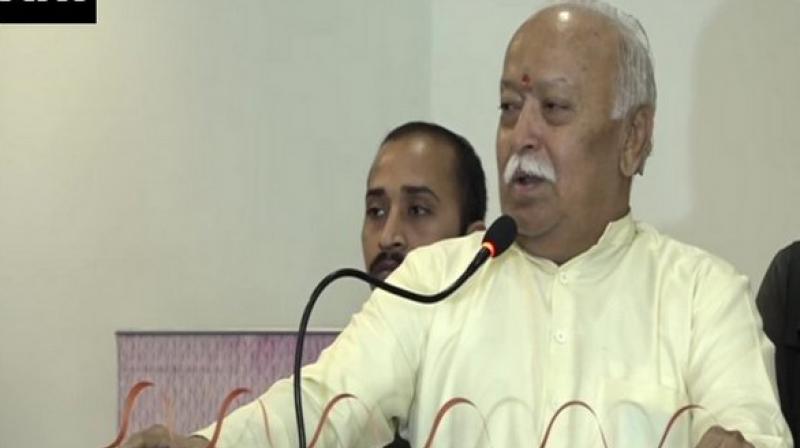 'The men who engage in abuse of women also have mothers and sisters. Honouring women should start from one's own home,' Bhagwat said. (Photo: File | ANI)

"The men who engage in abuse of women also have mothers and sisters. Honouring women should start from one's own home," Bhagwat said.

"Arjun never deviated from the moral path even when Urvashi came in front of him. He treated her as his mother. The thing we should do immediately is honour women in the society," he added.

Bhagwat was speaking at the Geeta Mahotsav programme organised in Delhi by spiritual Guru Swami Gyananand.

"Geeta has given all knowledge of spirituality in a condensed form. It is a summarized form of all Upanishads which Lord Krishna espoused to Arjun. It has advocated that one should do devotion along with performing duties," he said.

"Life presents many challenges and deals victories and losses to an individual. The key to rise above all these challenges has been elaborated in Bhagavad Geeta," he added.

He further said: "We all want that we should do such acts so that we are claimed as good people. Only some people stay put on the right path while the rest get deviated from the path. The Geeta says that if the mind of a person is not engaged in some work, it takes the individual towards negativity. Geeta says that the mind should synthesize positive forces and energies. Guru Nanak encapsulated the spiritual teachings in three key phrases - 'Kirat karo, naam japo aur vand chakho' - which translates to 'do your work, take the Lord's name and share your food'."

"If one has to take the basic advice of Gita, it is sacrifice of fear. Did Bhagat Singh, Rajguru and Sukhdev not know that they will be caught after bombing the assembly. They knew but still they performed the revolutionary deed because they knew their bodies are mortal but their longing for freedom is eternal," he added.