KCR alleged that Congress leaders have not been able to serve Telangana's interests in the irrigation sector. 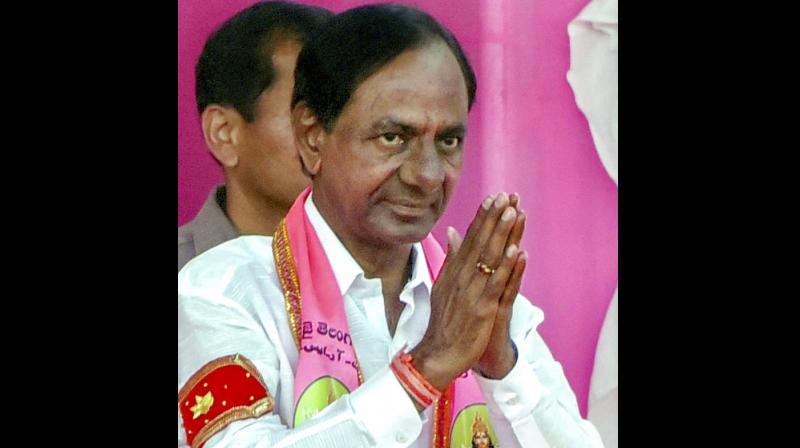 The previous Congress-led UPA government acceded a separate Telangana only because of the fight put up by TRS, TRS president K Chandrasekhar Rao claimed. (Photo: PTI)

Hyderabad: TRS president K Chandrasekhar Rao on Friday hit out at Congress Chief Rahul Gandhi over his comments that irrigation projects in Telangana have been redesigned for commissions.

Rao, who addressed election rallies at Illendu and other places, said that the state government has taken up redesigning of Sitarama and other irrigation projects in the interests of the state.

He alleged that Congress leaders have not been able to serve Telangana's interests in the irrigation sector.

Rahul Gandhi, would you come, do you have guts, shall we go to Rudramakota. Shall we see...named after your father, how Rajiv Sagar, Indira Sagar are? I will take you there....Not making worthless allegations," he said.

Alleging that Congress leaders in previous governments (in undivided Andhra Pradesh) have put in place 'ineffective' irrigation projects, Rao asserted that his government was constructing projects that are needed for the state.

"We are building projects what we need... Do we need commission? I will give you commission if you want. Who needs commission? Ours is not a life of commission like you. Our life is one of fighting," he said.

The previous Congress-led UPA government acceded a separate Telangana only because of the fight put up by TRS, Rao claimed.

He spoke about the various welfare measures of his government, including investment support scheme and insurance scheme for farmers.

Alleging that the NDA government did not respond to the request to set up a steel factory at Bayyaram in Khammam region, a matter mentioned in the AP Reorganisation Act, Rao said the government would start the steel factory on its own, if necessary.

Referring to Prime Minister Narendra Modi's criticism against the TRS government during his recent BJP campaign rallies, he asked if any of the 19 BJP-ruled states implemented schemes like investment support and insurance scheme for farmers and Rs 1,000 social security pensions.

Punning on chief minister KCR's initials, Rahul Gandhi on Thursday called him "Khao Commission Rao" who promised that he would "redesign" the state but instead redesigned irrigation projects, which resulted in cost escalation and burdened the people, only to benefit members of his family and contractors.