CM Devendra Fadnavis added that cases against the people involved in serious crimes will not be dropped. 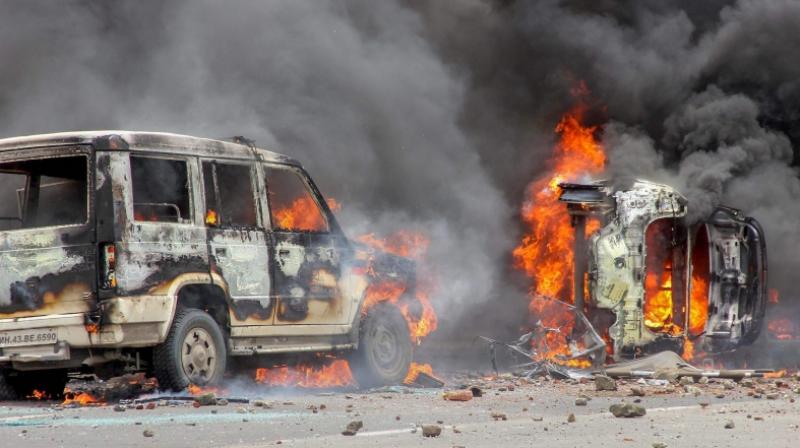 Flames rise from a burning vehicle as Maratha Kranti Morcha protesters clashed with police personnel during a protest called for reservations in jobs and education in Navi Mumbai on July 25 2018. (Photo: PTI)

Mumbai: In a fresh turn of events, Maharashtra Chief Minister Devendra Fadnavis has stated that the government would withdraw cases against those booked during the bandh called in the backdrop of the Bhima Koregaon violence in January and the recent Maratha reservation stir. However, cases against the people involved in serious crimes will not be dropped, he said.

A total of 543 cases were filed during the Maratha agitation. Out of these, 46 falls under the category of serious offences and cannot be withdrawn, while around 314 cases are under investigation and in the process of withdrawal.

In the Bhima Koregaon agitation, as many as 655 cases have been filed, out of which 63 involve serious offences. The probe is underway in 158 cases, while 275 have been recommended for withdrawal.

The Maharashtra Chief Minister also assured the state legislature that an Action Taken Report (ATR) pertaining to the Dhangar community will be tabled before the House in the next Assembly Session.

Dhangar community has put forth a demand for reservation in front of the state government. The shepherd community has been struggling for more than two decades seeking to be declared as an independent scheduled tribe. The people belonging to this community had also recently launched protests across Maharashtra for their demand.