The draft was prepared by an inter-minister group headed by Home Minister Rajnath Singh. 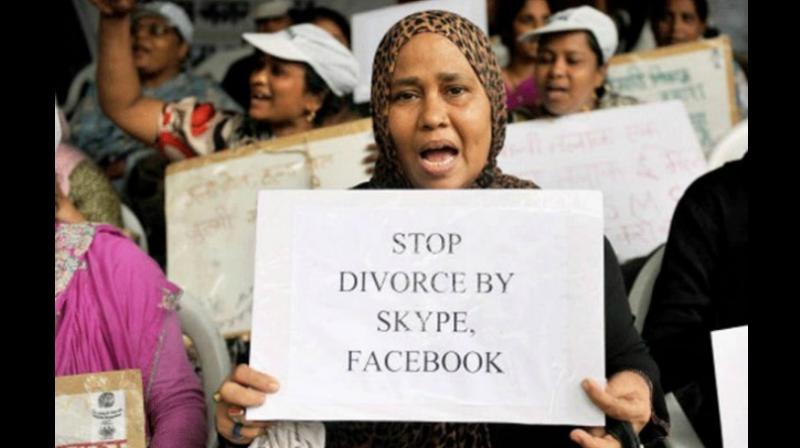 Under the draft law, triple talaq in any form -- spoken, in writing or by electronic means such as email, SMS and WhatsApp -- would be bad or illegal and void. (Photo: PTI)

New Delhi: Giving instant triple talaq will be illegal and void and will attract a jail term of three years for the husband, according to a draft law aimed to curb the practice which continues despite the Supreme Court striking it down.

The draft 'Muslim Women Protection of Rights on Marriage Bill' was sent to the state governments on Friday for their views, a senior government functionary said. They have been asked to respond to the draft urgently, he said.

The proposed law would only be applicable on instant triple talaq or 'talaq-e-biddat' and it would give power to the victim to approach a magistrate seeking "subsistence allowance" for her and minor children.

The woman can also seek the custody of her minor children from the magistrate who will take a final call on the issue.

Under the draft law, triple talaq in any form -- spoken, in writing or by electronic means such as email, SMS and WhatsApp -- would be bad or illegal and void.

"The provision of subsistence allowance and custody has been made to ensure that in case the husband asks the wife to leave the house she should have legal protection," the functionary said.

According to the draft law, which would be applicable to the entire country except Jammu and Kashmir, giving instant talaq would attract a jail term of three years and a fine. It would be a non-bailable, cognisable offence.

The functionary pointed out that after the Supreme Court order, the government was of the view that the practice would end. "But it continues. There have been 177 reported cases of instant talaq before the judgement and 66 after the order this year... Uttar Pradesh tops the list. Hence, the government planned a law," he explained.

He said the provisions of the Domestic Violence Act were found to be of little help in such cases even as the government and the Prime Minister's Office were receiving complaints from women.

The subjects of divorce and marriage come under the Concurrent list of the Constitution and Parliament is free to pass laws on it in emergencies. But going by the recommendations of the Sarkaria Commission, the government decided to consult states.

"The plan is to bring it in the winter session of Parliament," the functionary said.

As of now, the draft law is prospective in nature. But if Parliament feels, it can be implemented retrospectively once it is passed and gets the President's nod, he said.

Perhaps women who have been given triple talaq before the proposed law comes into force can also seek custody of minor children and subsistence allowance using its provisions, another official said.

Once the views of the states are received, the law ministry would move Cabinet with the proposal.

As the law stands today, a victim of 'talaq-e-biddat' or instant triple talaq would have no option but to approach the police for redressal of her grievance as a Muslim clergy would be of no assistance to her.

Even police are helpless as no action can be taken against the husband in the absence of punitive provisions in the law, they explained.

In August, the Supreme Court struck down the controversial Islamic practice of instant divorce or 'talaq- e-biddat' as arbitrary and unconstitutional.

But there have been reports of a number of divorces by way of 'talaq-e-biddat' even after the judgement, the functionaries said.

Despite advisories being issued to the members of the community against the archaic practice, there seemed to be no decline in the cases of divorce by 'talaq-e-biddat', they claimed.

In a recent case of 'talaq-e-biddat', a man working with a leading educational institution divorced his wife through WhatsApp and SMS, the functionary said quoting media reports.