16 rehabilitation centres have been established by the state government in which 1044 people are being given shelter. 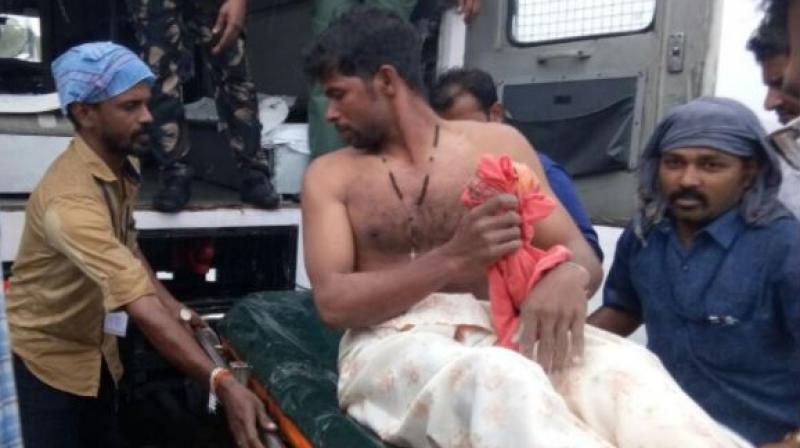 Search operations for several missing fishermen resumed this morning with Navy deploying a Dornier and an Advanced light helicopter with divers. (Photo: ANI/Twitter)

Atleast 62 houses were fully damaged and 240 houses partly damaged due to heavy rains. 16 rehabilitation centres have been established by the state government in which 1044 people are being given shelter.

Tamil Nadu Chief Minister Edappadi K Palanisamy on Friday announced an ex-gratia of Rs 4 lakh to the kin of the five people killed in rain related incidents in the district.

Several warships were deployed for rescue operations in the southernmost coast of Tamil Nadu and Kerala as deep depression over the Comorin Sea intensified into cyclone Ockhi.

A Defence spokesperson on Friday said 13 boats with 38 crew from Kerala and one boat from Tamil Nadu with four people onbard were missing. A Navy aircraft rescued eight of them.

Search operations for several missing fishermen, who had put out to sea from the coast in Kerala and Tamil Nadu, resumed this morning with Navy deploying a Dornier and an Advanced light helicopter (ALH) with divers.

A Kochi report said five Navy ships and four vessels from the Coast Guard have been deployed for search and rescue operations to locate missing fishermen. All the ships have been directed to be positioned along and off Kerala Coast and additional Dornier sorties will be undertaken on Friday.

Besides, two ships with relief materials are on stand by at Lakshadweep for humanitarian assistance.

The deadly storm has killed seven people in neighbouring Sri Lanka and affected the lives of nearly 20,000 people.