Rain and strong winds are likely to continue in different places in the next 24 hours. 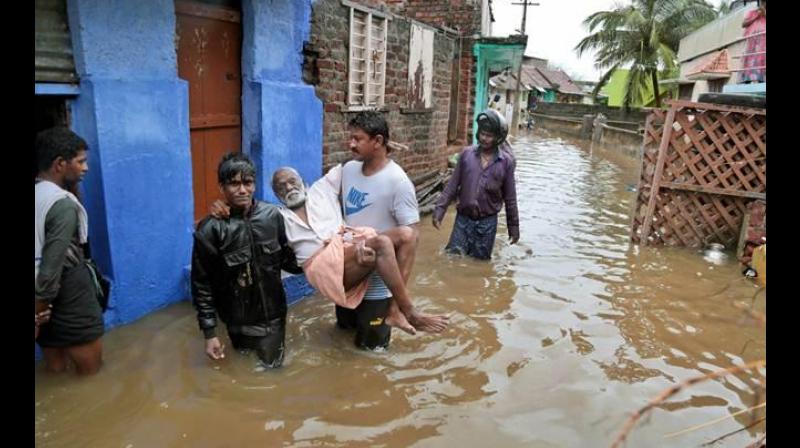 An elderly person is carried to safe place in a flooded locality following a heavy storm at Nagercoil in Kanyakumari district. (Photo: PTI)

Thiruvananthapuram/Chennai: As many as 218 fishermen from Kerala, stranded in the sea off the coast due to inclement weather conditions triggered by cyclone Ockhi, were brought safely to the shore on Friday even as the death toll rose to seven in the state.

Cyclone Ockhi, which in Bengali means 'eye', on Friday intensified into a severe cyclonic storm and moved to the Arabian Sea. It lay centered about 80km north-northeast of Minicoy in Lakshadweep.

Under its influence, heavy rains continued to lash coastal areas of the state, crippling normal life.

Tamil Nadu Chief Minister Edappadi K Palanisamy on Friday announced an ex-gratia of Rs 4 lakh to the kin of the five people killed.

Meanwhile, a red alert was issued for the Lakshadweep islands as the cyclone continued to move towards the archipelago on Friday.

Orders have been issued to evacuate people from low lying areas of various islands including Kalpeni, Minicoy, Kavratti, Agatti, Androth, Kadamath and Amini in the Union Territory of Lakshadweep, they said.

Rain and strong winds are likely to continue in different places in the next 24 hours.

According to the CMO, 218 fishermen, stranded in mid-sea off the state coast since Thursday, were brought safely to the shore through active coordination of various agencies including Navy, Airforce and Coast Guard.

Thirty-eight fishing boats, stranded in the mid sea, were spotted by the Navy and they were provided food and rescue kits.

Efforts to locate the other boats in the sea were going on, the CMO said adding that the government medical college and general hospital here have been kept ready to provide necessary treatment to fishermen brought to the shore.

The Kerala government has opened 29 relief camps in various places. A total of 2755 people,from 491 families are in these camps, government sources said.

A total of 56 houses were completely damaged and 799 houses suffered partial damage across the state, they said.

A Japanese cargo vessel chipped in to assist in the rescue operations by saving the lives of 60 fishermen from mid-sea. They have been brought to the Vizhinjam coast near here, official sources said.

The Indian Navy is putting in "maximum effort" to rescue fishermen from the sea which is very rough under the influence of Cyclone Ockhi, Vice Admiral A R Karve, Flag Officer Commanding-in-Chief, Southern Naval Command, told reporters on board the INS Tir at the Naval Base in Kochi.

The chief minister said the state has asked the defence ministry to deploy more aircraft for rescue operations in view of the cyclonic storm moving towards Lakshadweep.

Top navy officials said they have deployed two ships to the Lakshadweep Islands for carrying out rescue and rehabilitation operations in the island which is under threat of the cyclone.

People are being shifted to schools, they said.

The deadly storm has killed seven people in neighbouring Sri Lanka and affected the lives of nearly 20,000 people.