The arrest of a member of Mizoram police’s India Reserve Battalion, Laldintluanga Ralte, has added to the tension 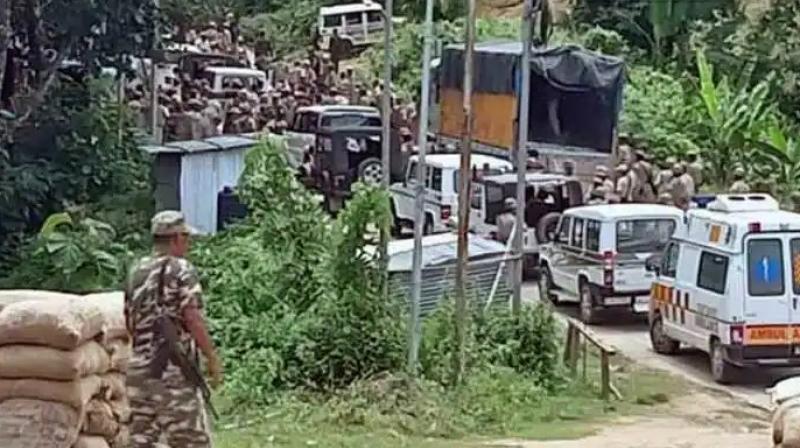 Mizo students now threatening to stop all vehicular movement from Assam if the Mizo policeman is not released by the Assam police. (File photo: Twitter)

Guwahati: The two-month-long relative peace on the restive Assam-Mizoram border was broken again with a high-intensity bomb blast at a border outpost, resulting in the arrest of a Mizoram policeman on Saturday by the Assam police from the area with cordex wire that was used to trigger the blast remotely.

The arrest of a member of Mizoram police’s India Reserve Battalion, Laldintluanga Ralte, 23, a resident of Bairabi in Mizoram’s Kolasib, has added to the tension between the two states with Mizo students now threatening to stop all vehicular movement from Assam if the Mizo policeman is not released by the Assam police.

The Assam police said: “After midnight, at about 1.45 am, it was reported that there was a high explosive blast using a detonating cord near Baicherra BOP under Ramnathpur PS, in which some Mizo miscreants were suspected to have been involved.”

“In this connection, Laldintluanga Ralte was arrested and sent to judicial custody,” Hailakandi SP Gaurav Upadhyay told reporters, adding that the police is investigating the matter.

Mizoram officials, however, said that Laldintluanga Ralte, of the First India Reserve Battalion, was picked up while he was on duty at Zophai in the border district of Kolasib. He was taken to the Ramnathpur police station before being shifted to the Barak Valley town of Hailakandi. The officer-in-charge of Bairabi police station in Mizoram told reporters that the constable had been booked under Sections 447 (trespass) and 120B (criminal conspiracy) of the IPC.

It is significant that in the last flareup in the border row on July 26, six Assam Police personnel were killed and over 50 others injured. The Assam police had alleged people from the Mizoram side threw stones and attacked them. The Mizoram government, on the other hand, said the state police responded only after the Assam police officers “forcibly crossed” a post manned by CRPF personnel.

The arrest of the police constable on Saturday for the bomb blast has irked Mizo student leaders. The Bairabi branch of student outfit Mizo Zirlai Pawl issued a warning that if the arrested man was not released by 4 pm on Sunday, they will stop all vehicles from Assam from entering Zophai in Bairabi.

Another incident of Friday in which a resident of Mizoram was killed after being allegedly robbed of Rs 1 lakh by some non-tribal criminals has also added to the fresh tension in the area.

Three districts of the Barak Valley region in Assam -- Hailakandi, Karimganj and Cachar -- share a 165-km border with Mizoram. There are ongoing border disputes between the two states at five locations.