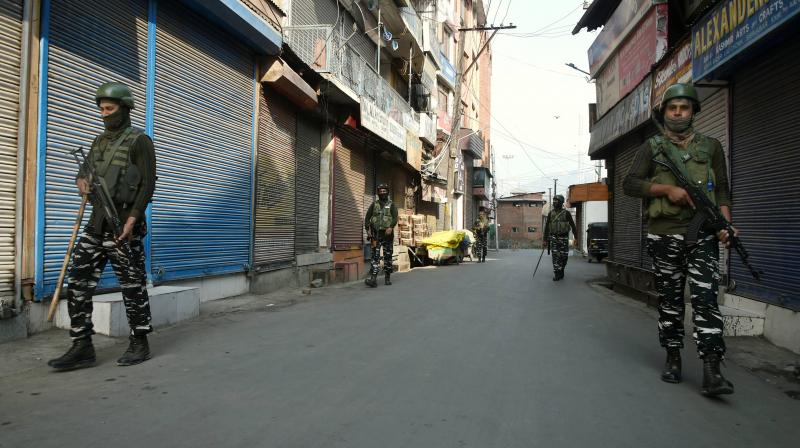 Security personnel patrol at a closed market during a strike called by the Hurriyat Conference (APHC) against the new land laws notified by the Centre for Jammu and Kashmir, in Srinagar, Saturday, Oct. 31, 2020. (PT)

Srinagar: Normal life came to a grinding halt across Kashmir Valley on Saturday in response to a call issued by separatist Hurriyat Conference against various moves initiated by the Centre in past fifteen months particularly enacting a series of new land laws and amending some of the existing ones recently to make all Indian citizens eligible to own immovable properties in Jammu and Kashmir.

Market places and other business centres in almost all major cities and towns of the Valley remained closed whereas only skeleton transport services besides private cars were plying on select routes. The impact of the strike call was maximal in Srinagar’s commercial hub Lal Chowk and its neighbourhood and entire central Srinagar.

Hurriyat Conference faction led by Kashmir’s chief Muslim cleric Mirwaiz Umar Farooq termed the success of the strike call a “befitting reply” to the Centre and “outright rejection” of all the “anti people” moves and decisions taken by it since August last year in J&K.

This was for the first time since August 5, 2019 when J&K was stripped of its special status and split up into two Union Territories that the amalgam faction had openly issued such a call. Sources close to the Hurriyat Conference said that its leadership is upbeat and their cadres are whipped up over the widespread endorsement of the strike call.

The Mirwaiz is under house arrest since August 5 last year but his close associates Prof. Abdul Ghani Bhat, Bilal Ghani Lone and Masroor Abbas Ansari had in a joint statement issue here on Wednesday strongly denounced the “incessant anti people orders being issued by the government of India at frequent intervals to intimidate and psychologically torture the people of J&K”.  They had said that this “imperial approach” is bound to fail and reiterated the amalgam’s call for engagement and dialogue among stakeholders for resolution of the Kashmir dispute.

Meanwhile, CPIM’s J&K face Mohammad Yousuf Tarigami has alleged that a year after “arbitrary” J&K Reorganization Act was implemented “in an undemocratic and unjust manner on October 31 last year, the “onslaught” by the BJP government at the Center on the basic and democratic rights of people of J&K continues unabated.

In a statement issued here on Saturday, Tarigami said that the new land laws notified on Monday like the new domicile rules notified earlier in April, do nothing to assure the people of J&K that their concerns on demographic change are being taken into consideration. “Instead the BJP government wants to convey to the people of J&K there that they are completely incidental to its plans for the one-year-old Union Territory”.

He asserted, “It is important to understand as to who will buy land in the erstwhile state of J&K now. The new land laws will allow large land sharks and the corporate to play their game which will be a ruin of the gains and advancement made by the peasantry and their children over the decades”.

He added that just days after the Centre opened land of J&K for outsiders, the J&K administration has transferred 24 thousand kanals of land to the Industries and Commerce Department for so-called investment purposes while almost an equal land will be notified shortly following clearance from the Forest Department to 65 big corporate houses to set up their units.

He alleged, “The intention to abolish the Constitution of J&K and revoking Articles 370 and 35A was to change the demography of Jammu and Kashmir. Now with such laws everything becomes clearer. From August 5, 2019, the BJP government’s actions in J&K have smacked of hubris, as if to say, ‘we do what we do because we can’”.

He said that that may win some elections for the BJP, but it is not a solution to the longstanding problems in Kashmir.