The air quality has remained hazardous in the national capital for the past several days. 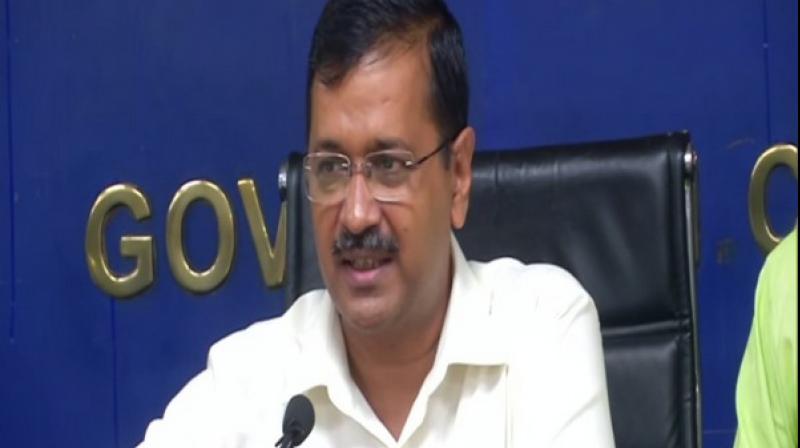 'Yesterday, people protested at Punjab and Haryana Bhawan and expressed their anger against the governments there," the Chief Minister said in a tweet. (Photo: File)

New Delhi: Blaming Haryana and Punjab government for turning Delhi into a gas chamber, chief minister Arvind Kejriwal on Friday distributed over 50 lakh masks to school children and appealed other residents to use them.

"Delhi has turned into a gas chamber due to smoke from crop burning in neighbouring states. It is very important that we protect ourselves from this toxic air. Through private and government schools, we have started distributing 50 lakh masks today. I urge all Delhiites to use them whenever needed," Kejriwal tweeted.

"The Khattar and Captain governments are forcing farmers to burn stubble, which is causing severe pollution in Delhi. Yesterday, people protested at Punjab and Haryana Bhawan and expressed their anger against the governments there," he added.

Kejriwal told school children in the city to write letters to chief ministers of the two states urging them to control it.  He distributed masks to school children as part of the government's initiative to protect them from pollution and also explained children about stubble burning.

"Please write letters to Captain uncle and Khattar uncle and say, 'Please think about our health'," he told children.  He also urged Haryana CM Manohar Lal Khattar and Punjab CM Capt Amarinder Singh to think about the health of children and take steps to stop stubble burning.  The chief minister also urged students to help in stopping garbage burning in the national capital.  "We have to stop garbage burning in Delhi. If you see anyone doing so, request them to not do it. If they do not listen, there is a WhatsApp number to report it," he said.

The appeal comes ahead of the odd-even scheme, which is all set to make a comeback in Delhi from Monday.

The blanket of haze over Delhi continues to thicken with the national capital's pollution levels increasing overnight by around 50 points, taking the overall air quality index to 459 on Friday morning.

The air quality has remained hazardous in the national capital for the past several days.

All the 37 air quality monitoring stations across Delhi recorded the air quality in the severe category on Friday morning.

Neighbouring Ghaziabad was the most-polluted city in the country, with the levels of PM2.5 — tiny particulate matter less than 2.5 microns that can enter deep into the lungs — reaching as high as 493. Greater Noida (480), Noida (477), and Faridabad (432) also breathed extremely polluted air.