Nagas can use flag for non-govt purposes: Ravi. 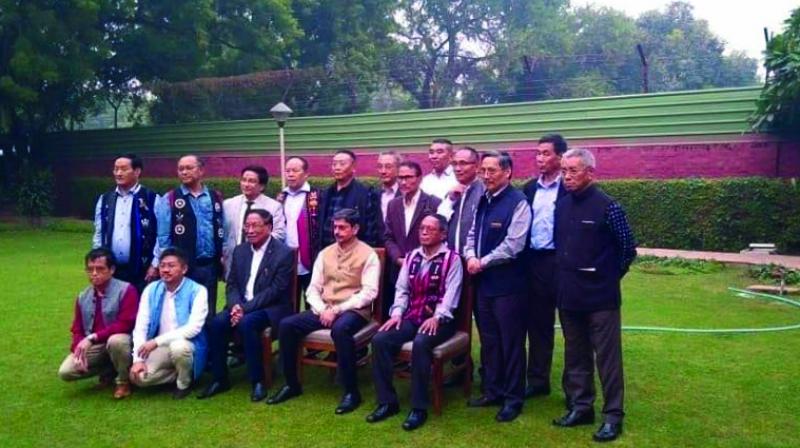 Guwahati: In what appears to be a major success, the ongoing peace talks between the Prime Minister’s envoy R.N. Ravi and the collective leadership of the NSCN (I-M) has succeeded in creating a consensus on all the major contentious issues. The focus of the peace process is now to take all stakeholders, including neighbouring states, on board by addressing their concerns.

When contacted by this newspaper, Mr Ravi, who is also the governor of Nagaland, said they succeeded in sorting out the differences on all contentious issues by tightening some loose ends. He also clarified that the Government of India had not agreed to any separate flag for Nagaland state. Mr Ravi, however, said that if some group wants to use a flag for non-governmental purposes, it wouldn’t be an issue for the Government of India.

Saying that after settling all issues with NSCN (I-M) and the NNPGs, Mr Ravi said his focus in the next phase would be address the concern of all stakeholder states. “We are going to hold talks and start consultations with all stakeholder states, particularly Manipur and Arunachal Pradesh, to take them on board,” he said, saying the Government of India would not sign the Naga peace agreement in isolation. All stakeholders will be taken into confidence, Mr Ravi said, expressing satisfaction on concluding the talks with the NSCN (I-M) and the NNPGs.

Clarifying that the government wasn’t going to raise any objection to the use of a separate Naga flag for all non-governmental purposes, security sources said the Government of India and the NSCN (I-M) had agreed to resolve the issue of a separate constitution and the “Greater Nagaland” demand through a democratic process after signing the peace agreement.

Former Nagaland CM and Leader of the Opposition in Nagaland T.R. Zeliang said: “The dream and desire of the Naga people for permanent peace and tranquillity in our land will soon become reality after the positive outcome of today’s meeting. Once again big congratulations to all parties involved in bringing about the understanding.”

In a social media post, Mr Zeliang went on to add: “I congratulate the Prime Minister and Union home minister for having the resoluteness to solve the Naga issue. Also, hearty congratulations to Mr R.N. Ravi, the interlocutor, and the NSCN (I-M) and NNPGs for arriving at a mutual understanding.”

It is significant that Mr Zeliang met the two groups — NSCN (I-M) and the Naga National Political Groups (a conglomerate of seven other Naga groups) — in New Delhi on Tuesday and urged them to unite and sign the peace deal to ensure peace in Nagaland. He told the media: “I have been told that the issue of territorial integration will be resolved in a democratic or political process very soon.”

In the wake of the Naga talks deadline, a delegation of the Naga People’s Front had met the 15-member NSCN (I-M) delegation and representatives of the NNPGs in New Delhi ahead of the last leg of talks.

Besides all civil society groups, student bodies and Church leaders, Nagaland’s main Opposition party had also appealed both negotiating parties to hammer out their differences and sign the final deal, paving the way for a permanent peace.

Normal life in Manipur came to a standstill on Thursday in response to the call for a 20-hour strike by the Coordinating Committee on Manipur’s Integrity (COCOMI). An appeal by Manipur CM N. Biren Singh to call off the strike also went in vain.

The strike call was given after speculation in a section of the media about the signing of the Naga peace pact on October 31. The Manipur CM, who led a 20-member team of all political parties, met Union home minister Amit Shah on Wednesday night. Mr Shah told the team that no agreement will be signed without consulting all stakeholders. After this assurance, Mr Biren Singh urged COCOMI to call off the strike, but his appeal went unheeded.