Merkel will be meeting with the Indian leadership, besides a business delegation during her visit. 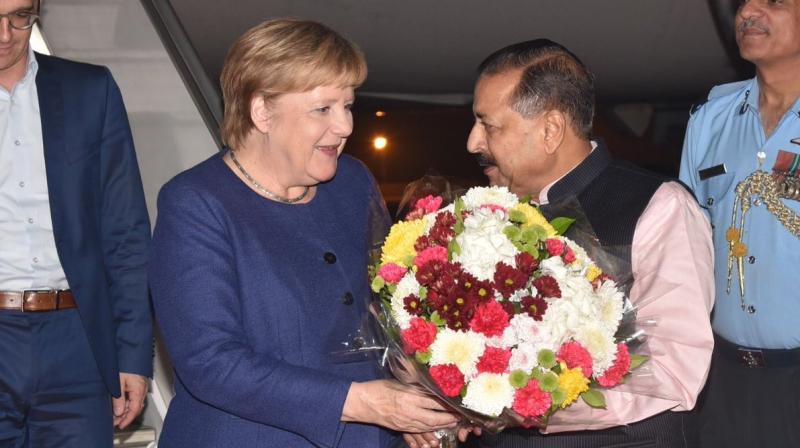 Merkel was received at the airport by MoS Prime Minister's Office Jitendra Singh. She will be meeting with the Indian leadership, besides a business delegation during her visit. (Photo: MEA | Twitter)

New Delhi: German Chancellor Angela Merkel arrived in New Delhi on Thursday night on a two-day visit during which she will hold talks with Prime Minister Narendra Modi on a host of bilateral issues, with nearly 20 agreements expected to be signed between the two countries.

Merkel was received at the airport by MoS Prime Minister's Office Jitendra Singh. She will be meeting with the Indian leadership, besides a business delegation during her visit.

She will be accorded a ceremonial reception at the Rashtrapati Bhavan on Friday morning and will pay tribute to Mahatma Gandhi at Rajghat later in the day.

"Enriching the strategic texture of our relationship. German Chancellor Angela Merkel arrived in Delhi beginning her State visit to India during which she, along with PM @narendramodi will co-chair the 5th-IGC (Inter Governmental Consultations).This would be the 5th meeting between the leaders within a year," MEA spokesperson Raveesh Kumar tweeted.

Merkel will co-chair the 5th IGC with Prime Minister Modi following which the two leaders will make press statements and a raft of agreements will be signed between the two sides.

She will call on President Ram Nath Kovind in the evening and will also hold a meeting with the prime minister at his Lok Kalyan Marg residence.

Before heading home, the Chancellor will visit the Dwarka Sector 21 Metro Station.

Ahead of the visit, German envoy to India Walter J Lindner had said the PM Modi and Chancellor Merkel have a "very good relationship and they can talk about any issue. I do not want to anticipate what the two leaders will be talking about."

He was responding to a question on whether the Kashmir issue will be discussed between them.

Lindner had said the position of Germany on Kashmir is consistent with that of the European Union which had asked India and Pakistan to resolve the Kashmir issue through dialogue, seeking a peaceful and political solution, respectful of the interests of the Kashmiri population on both sides of the Line of Control.

Chancellor Merkel will be holding talks with PM Modi on a host of bilateral issues and nearly 20 agreements are expected to signed between the two countries, sources said.