BJP hit back at Divya Spandana and said, 'the values of the Congress are dropping 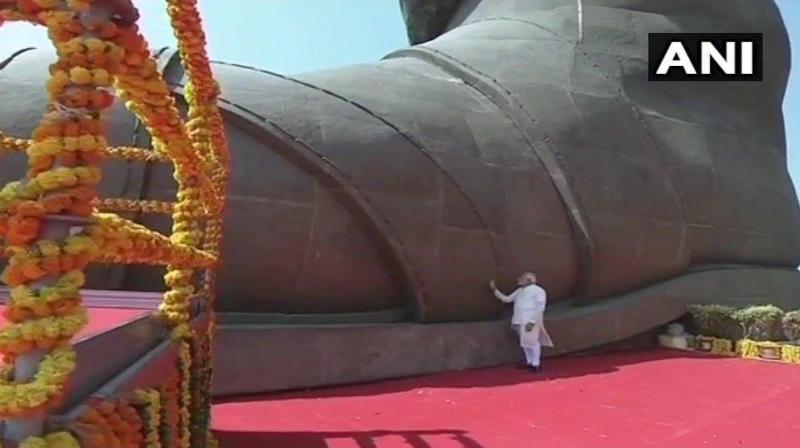 Divya Spandana tweeted photo of Prime Minister Narendra Modi standing next to the foot of ‘Statue of Unity’ and captioned it as 'Is it a bird dropping?' (Photo: Twitter | ANI)

New Delhi: Congress social media cell head Divya Spandana has been facing a huge backlash on social media and condemnation, not just from the BJP but also from her own party for her tweet targeting Prime Minister Narendra Modi.

Divya Spandana on Thursday tweeted photo of Prime Minister Narendra Modi standing next to the foot of the world’s tallest statue, ‘Statue of Unity’ and captioned it as “Is it a bird dropping?”

Is that bird dropping? pic.twitter.com/63xPuvfvW3

A furious BJP hit back at the Congress leader and said, “the values of the Congress are dropping" and targeted Rahul Gandhi.

Ummm no, it is the values of the Congress that are dropping.

Asked about the tweet, BJP spokesperson Sambit Patra hit out at the opposition party, alleging that "this is the real culture" of the Congress party.

“They miss no opportunity to abuse the Prime Minister of India,” Patra said.

“It is the same party which called the Prime Minister 'neech'. Shashi Tharoor called him a scorpion and now Divya Spandana says that he is a bird's dropping," Patra said.

"This is nothing but language of arrogance from the Congress party for the normal Indian who with his sheer hardwork become the prime minister of the country," he said.

A normal Indian appears bird's dropping to them, while a dynast is power centre for them, Patra added.

After criticism, Spandana defiantly tweeted, "When you're done huffing and puffing, take a breath and hold a mirror to yourselves. My views are mine. I don't give two hoots about yours. I'm not going to clarify what I meant and what I didn't (because) you don't deserve one."

This isn’t the first time Spandana, also known as Ramya, has been in the news in controversial circumstances. In September, a sedition case was filed against her in Lucknow in Uttar Pradesh for her post which showed Prime Minister Narendra Modi painting the word "chor" (thief) -- on the forehead of a likeness of himself.

Last month, Spandana had found herself in yet another controversy after speculations were rife that she had quit from her post as the Congress social media cell in-charge. The rumours gained momentum after her Twitter bio read, “Actor, former member of Parliament and currently handles social media and digital communication for Congress” disappeared from her account for a while.

However, Spandana denied the rumours of her quitting the Congress and blamed a ‘technical bug’ for her missing bio.

Divya Spandana took charge of Congress social media head last year and ramped up the Twitter presence of not just the party but also of its chief Rahul Gandhi.