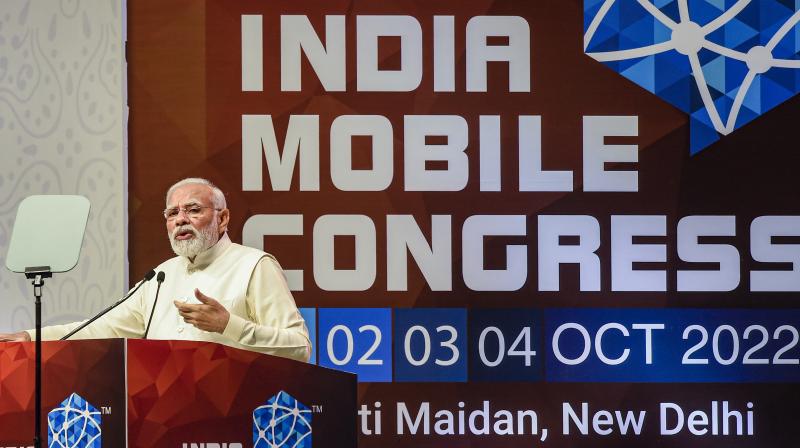 New Delhi: Prime Minister Narendra Modi on Saturday launched the 5G telephony services that promise to provide ultra high-speed internet on mobile phones, saying it marks the beginning of a new era and presents a sea of opportunities.

The Prime Minister launched 5G services in select cities at the India Mobile Congress (IMC) 2022 conference. The services will progressively cover the entire country over the next couple of years.

"5G marks the dawn of a new era and presents a sea of opportunities," he said.

While the nation was dependent on foreign countries for technology for 2G, 3G and 4G telecom services, India has created history with 5G, he said.

The Prime Minister said his government's vision for 'Digital India' was founded on four pillars -- the cost of devices, digital connectivity, data cost and digital-first approach.

This approach has led to mobile manufacturing units in India increasing from just two in 2014 to over 200 now, bringing down the cost of handsets.

From zero exports, the country is now shipping phones worth crores of rupees. Also, digital payments have increased, he pointed out.

Taking a dig at the previous Congress-led UPA government, he said this was possible because of the right intentions of his government.

"2G ki niyat and 5G ki niyat mein yehi farak hai (this is the difference between the intentions during 2G era and 5G era now)," he said in reference to the alleged 2G spectrum allocation scam.

Capable of supporting ultra-high-speed internet, the fifth generation or 5G service is expected to unleash new economic opportunities and societal benefits, serving as a transformational force for Indian society.

After the launch, all three major telecom operators demonstrated one use case to show the potential of 5G technology in India.

Billionaire Mukesh Ambani's Reliance Jio connected a teacher from a school in Mumbai with students in three different locations in Maharashtra, Gujarat and Odisha.

This demonstrated how 5G will facilitate education by bringing teachers closer to students, obliviating the physical distance between them. It also demonstrated the power of Augmented Reality (AR) on screen and how that is being used to teach children across the country, remotely, without the need of an AR device.

Modi interacted with school children in the demo case, asking them about their favourite subject and how the use of technology has helped in learning.

The Vodafone Idea test case demonstrated the safety of workers in an under-construction tunnel of Delhi Metro through the creation of a 'digital twin' of the tunnel on the dias. The digital twin will help give safety alerts to workers in real-time from a remote location.

Modi interacted with Lt Governor of Delhi V K Saxena as well as the workers in the tunnel.

In the Airtel demo, a girl from Uttar Pradesh witnessed a lively and immersive education experience to learn about the solar system with the help of virtual reality and augmented reality.

The girl shared her experience of learning with the Prime Minister by appearing on the dias through a hologram.