Vijayan had assured him that they would be holding talks with the Centre on the matter and were trying to resolve it. 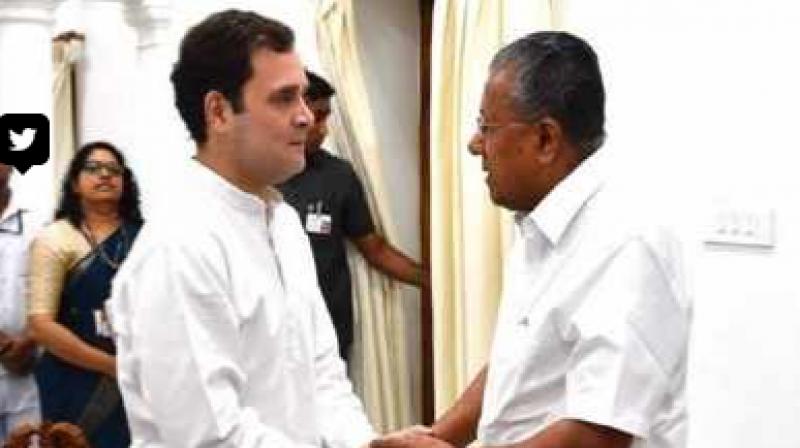 Gandhi, who is the Wayanad MP, met Vijayan at Kerala House and held discussions for about 20 minutes. (Photo: Twitter)

Thiruvananthapuram: Congress leader Rahul Gandhi met Kerala Chief Minister Pinarayi Vijayan in New Delhi on Tuesday and apprised him of the hardships faced by people of Wayanad due to the night traffic ban on the national highway passing through Bandipur Tiger Reserve in Karnataka.

Gandhi, who is the Wayanad MP, met Vijayan at Kerala House and held discussions for about 20 minutes.

Later, talking to reporters, Gandhi said he had taken up the issue of night travel ban and the agitation by youngsters on the matter with the Chief Minister.

Vijayan had assured him that they would be holding talks with the Centre on the matter and were trying to resolve it.

He noted that the issue was causing lot of pain to wayanad and Kerala.

"This is a very important matter and it needs to be tackled. The Chief Minister assured us that they are apprised of the situation and are trying to resolve it," he said.

The devastation caused due to the recent landslides in Wayanad during the heavy rains and the matters relating to compensation to the affected people were also discussed, he added.

Vijayan is expected to hold talks with various Union ministers on the night traffic ban.

Meanwhile, the indefinite relay fast by the activists of the samara samithi, who are members of various youth organisations, entered the seventh day on Tuesday.

Students are expected to take out a march on Tuesday.

Around 1,000 farmers and local people, including women, participated in the march from nearby Sultan Bathery to the Kerala-Karnataka border at Moolahalli demanding round the clock connectivity through the forest stretch of NH-766.

The Chief Minister is likely to take up the issue with Union Environment Minister Prakash Javadakar and Transport minister, Nitin Gadkari.

Gandhi is visiting his constituency on October 3 to express solidarity with the protest, Congress sources said.

Expressing solidarity with the fasting youth, the Congress MP had on Sunday said the traffic ban has caused hardship to lakhs of people in Kerala and Karnataka and asked the central and state governments to safeguard the interests of local communities, while protecting the environment.

The movement of traffic through the tiger reserve is banned from 9 pm to 6 am to reduce disturbance to wildlife.

Vijayan had suggested that construction of elevated stretch through the core critical tiger habitat.

However, Javadekar, in a letter to Vijayan this month, had stated that the state's recommendations had been discused at the committee of Secretaries and it was recommeded to maintain status quo on restriction of night time traffic through Bandipur Tiger reserve and strengthen the alternative route already available for night time traffic.

The minister also stated that the alternative route, though passing through forest area, was not a 'Critical Tiger Habitat' and can be suitably mitigated.