Gopal Bhargava sought to portray the by-election as a 'fight between Pakistan and India' and not just a contest between Congress and BJP. 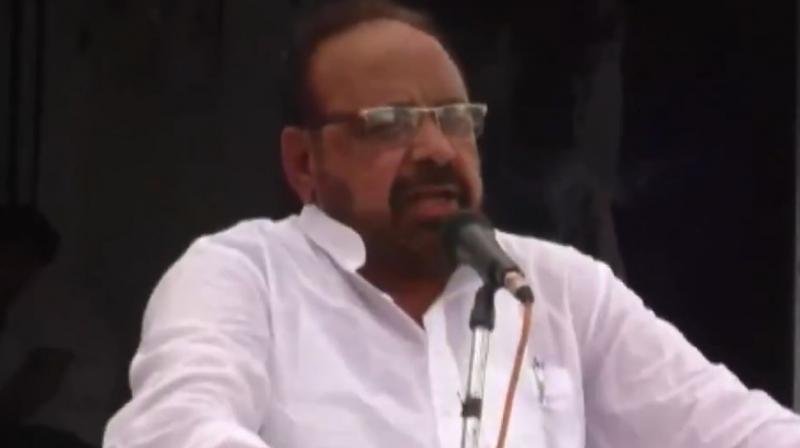 He asked the electorate in Jhabua to vote for BJP candidate Bhanu Bhuria as he "represents India" and said his rival Congress nominee "represents Pakistan". (Photo: Screengrab)

Jhabua/Bhopal: An FIR has been filed against senior BJP leader Gopal Bhargava on orders of the Election Commission for allegedly violating the model code of conduct with his remarks on the October 21 bypoll in Madhya Pradesh's Jhabua Assembly seat, officials said on Tuesday.

Gopal Bhargava, who is Leader of the Opposition in the Madhya Pradesh Assembly, on Monday sought to portray the by-election as a "fight between Pakistan and India" and not just a contest between the ruling Congress and the opposition BJP.

He asked the electorate in Jhabua to vote for BJP candidate Bhanu Bhuria as he "represents India" and said his rival Congress nominee "represents Pakistan".

Madhya Pradesh's Chief Electoral Officer V L Kantha Rao told PTI on Tuesday that taking cognisance of the remarks, "we directed the district returning officer and collector to file the First Information Report (FIR) in the matter after finding the controversial statement was violation of the model code of conduct."

The collector sent his report and subsequently the FIR was filed late Monday night, he said, adding that the matter was under investigation.

Jhabua's Superintendent of Police Vineet Jain said based on the report of returning officer Abhay Kharadi, the FIR was lodged against Gopal Bhargava at the district's Kotwali police station under relevant sections of the IPC and the Representation of the People Act, for violating the model code of conduct.

Seeking support for the BJP in tribal-dominated Jhabua, Gopal Bhargava on Monday said, "I, with faith, can say the country's respect is at stake right now."

"It is not a fight between two parties. This is an election between India and Pakistan," he told a gathering. The by-election was necessitated after BJP's G S Damor resigned as the Jhabua MLA after winning the Lok Sabha election from the Ratlam-Jhabua seat earlier this year.