India   All India  01 Oct 2018  Rajasthan police starts own version of ‘KBC’ to raise awareness about laws
India, All India 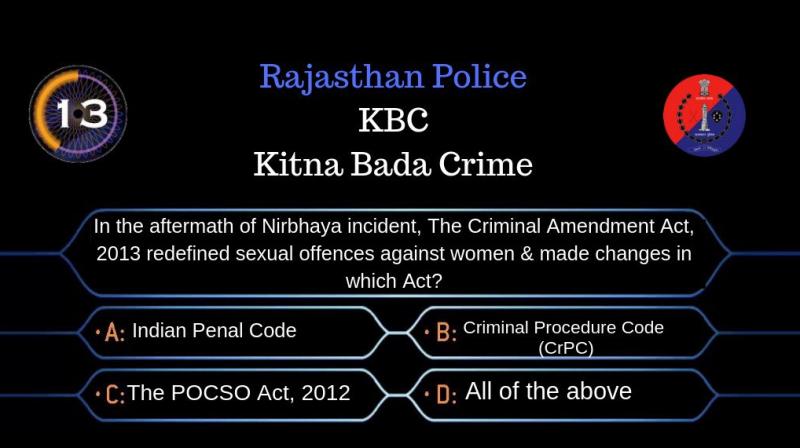 Jaipur: Rajasthan police is getting innovative day by day. After using cricket and Bollywood to send the message across about fake news, videos and traffic rules; the state police has come with another interesting way to create awareness about the law.

It is using social media to have its own quiz on the lines of “KBC”—‘Kaun Banega Crorepati’, the popular TV quiz show for the last 18 years. The police version of “KBC” is called ‘Kitna Bada Crime’ that was launched on its Twitter handle a week ago.

Anyone following the Rajasthan Police on Facebook and Twitter can answer simple questions. “The purpose is to engage people in an interesting way to teach them about laws that deal with crime,” DGP O P Galhotra said.

One question is asked every day. The participants are given four options to choose from and a clue is also given to help them give the right answer. For example, the sixth question asked is to name the law in which changes were made post Nirbhaya incident and sexual offences against women were redefined.

With every question, the number of responses is increasing. The state police with 14,500 followers received 201 likes and 75 retweets for the sixth question whereas the fifth question had 67 retweets and 138 likes. This comes despite no prize for the right answer. However, people seem to like it as they do not just give answers but also suggestions and criticism.

“The objective is to educate, inform and sensitize people about crime and laws," said ADG (CB and CID) Pankaj Kumar Singh, who is instrumental behind many such interesting initiatives.

Earlier, with help of a creative agency, the state police came up with catchy yet meaningful slogans against traffic violations, crime and dangerous Momo challenge. Take this: “Momos are always welcome on dinner table, but not on your phone.

Asking people to wear helmet, it used Bollywood hit Singham’s famous dialogue to get their attention. “Bollywood inspires us all. Don’t bring that inspiration roads and try to be Khataron ke khiladi. We will come knocking like Singham and say Aata Majhi Satakali.”

Or telling women that they can trust the police, it came out with a slogan on Raksha Bandhan: “Yeh Rakshabandhan hai Surakshabandhan”.

However, not every creative idea received accolades. Some backfired like the one in which it used Indian pacer Bumrah’s “infamous” no ball that gave a reprieve to Pakistan opener Fakhar Zaman despite being caught behind the wicket in ICC champions trophy final last year. He went on to score 180.

The traffic police used Bumrah’s no ball with a picture of a couple of cars standing behind the ‘Zebra Crossing’ saying, “Don’t cross the line. You know it can be costly.”

Bumrah didn’t like it a bit and responded on social media saying, “Well done Jaipur traffic police. This shows how much respect you get after giving your best for the country. But don't worry, I won't make fun of the mistakes which you guys make at your work because I believe humans can make mistakes.”

Despite the apology from the police, the Indian pacer was not able to get it off his chest. So, once again took to social media to settle the score after winning the Asia Cup three days ago.

“Some people love to use their creativity on the sign boards. Hope this one fits there as well!!" Bumrah tweeted.