India   All India  01 Oct 2018  Rajasthan Congress all set to play ball with Mayawati
India, All India

Rajasthan Congress all set to play ball with Mayawati

The Congress has a huge 12 per cent vote gap to fill from the last time if it wants to return to power. 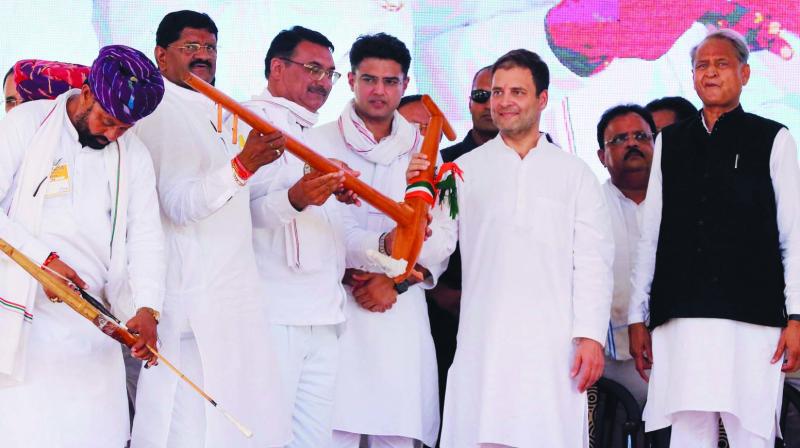 Led by Sachin Pilot, the Rajasthan Congress does not want to lose an opportunity to bounce back to power in Assembly polls after 10 years.

Till recently Congress leaders in Rajasthan wanted to contest Assembly elections alone but they were forced into a rethink after BSP chief Mayawati snubbed the party in Chhattisgarh and tied up with Ajit Jogi and declared her party’s list for MP.

Jaipur: BSP supremo Mayawati’s pressure tactics have paid off or so it seems. A reluctant Congress is now ready for a pre-poll alliance with the like-minded parties in Rajasthan. The Congress leadership in the state was bent upon contesting the Assembly elections on its own till the time Mayawati tied up with Ajit Jogi in Chhattisgarh and declared her candidates in Madhya Pradesh.

A Congress leader admitted that soon after Mayawati’s aggressive moves in Chhattisgarh and Madhya Pradesh, the Rajasthan Congress was forced to reconsider the demerits of ignoring the BSP. Thereafter, Congress leaders sent feelers to the BSP chief hinting that a poll alliance is workable in Rajasthan.

The BSP had contested 195 seats, out of the total of 200, in 2013. The biggest worry for the Congress now is that its votes may get split if the BSP decides to contest on all the 195 seats and turns the year-end Assembly polls into a triangular fight, with BJP being the other rival, said a party leader.

Apart from the BSP, the Congress is also worried that some fringe players, mainly BJP rebels, may also harm its prospects of making a comeback in the state after 10 years. Some of the local strongmen like Hanuman Beniwal, Manikchand Surana and Randhir Singh Bhinder had won as independents last time despite a Modi wave sweeping across the country while others, including Ghanshyam Tiwari and Manvendra Singh, won on the BJP ticket but parted ways with the ruling party recently.

The Congress fears that the fringe players may hold on to their seats this time as well, which may not be difficult given that they are popular in their constituencies.

Second, the popular belief that rebels eat into their own party’s vote bank may not hold true this time. Having broken ranks with the BJP, these independents or rebels have immunised themselves against any anti-incumbency feelings people may have against the ruling party. Also, the disgruntled BJP workers and their supporters would prefer to side with them than the Congress they have opposed all their life.

These leaders have floated their own parties, trying to forge an alliance and intend to put up candidates on all the seats. “What it means for us is not just loss of a few seats but also a dent in the anti-BJP vote share,” said a Congress leader from western Rajasthan.

The Congress has a huge 12 per cent vote gap to fill from the last time if it wants to return to power. In the previous Assembly election, 15 Independents won and they were the third highest in poll percentage, 8.21 per cent. In Assembly election, where the margin of victory is often wafer-thin, every vote counts.

In 2008, when Kirori Lal Meena walked out of the BJP and fielded his own candidates, the Congress fell short of five seats to the majority mark. The BSP had won six seats, but Mr Meena and independents supported by him won nearly 10 seats. In 1993, the Congress despite being a favourite got just 76 seats with 0.33 per cent votes less than the BJP. Then, 21 independents had won with 12.90 per cent votes and the BJP formed the government with their support.

This is what former chief minister and AICC general secretary Ashok Gehlot has warned against in party meetings.

Gurjar leader Kirori Singh Bainsla also said ditto. Days after forcing chef minister Vasundhara Raje to cancel ‘Gaurav Yatra’ in his stronghold of Bharatpur, he had vowed to protest against ‘Sankalp Yatra’ by the Congress.

Political observers say the Congress, which has been hoping to benefit from anti-incumbency and cracks in BJP’s caste support, cannot take things for granted. Thus, giving up reluctance for pre-poll alliance with the BSP and other like-minded parties is a wise and timely decision.