The Prime Minister has worked for inclusive development despite being a 'victim of political intolerance', Naqvi said. 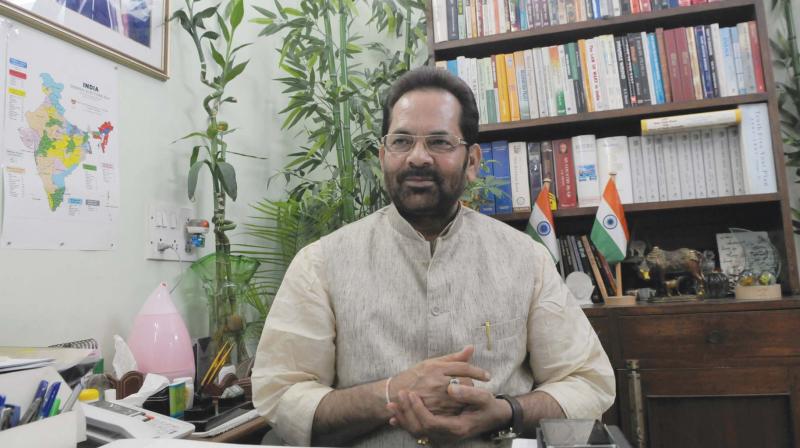 Naqvi made the remarks after laying the foundation stone of the first world-class educational institute for the poor, backward and minorities in Alwar. (Photo: File)

Alwar: Union minister Mukhtar Abbas Naqvi said Monday that Prime Minister Narendra Modi overcame the challenge posed by the "termite of corruption" and "stains of failure" left behind the earlier regime, to ensure development of all sections of the society.

Naqvi made the remarks after laying the foundation stone of the first world-class educational institute for the poor, backward and minorities in Kohrapipli village in Alwar district of Rajasthan.

The institute will become operational by 2020, he said.

The prime minister has worked for inclusive development despite being a "victim of political intolerance", Naqvi said.

The central government has worked on a war-footing to ensure affordable, accessible and quality education to all the needy, including minorities, the Minority Affairs Minister said at the event, according to a statement released by his office.

The prime minister has worked with commitment to "inclusive growth" without any discrimination and he did not allow vote bank politics to dominate "our determination for development", Naqvi said.

He said that it was a tough challenge to remove the "termite of corruption" and the "stains of failure", received as "legacy" from the earlier regime at the Centre, but Prime Minister Modi was successful in fulfilling his commitment to development of all sections. Naqvi said the educational institute in Alwar will prove to be a milestone in the direction of affordable, accessible and quality education for the weaker sections of the society, including minorities.

"We have proposed 40 per cent reservation for girls in this institution," the minister said. Naqvi also laid the foundation stone and inaugurated various other development works.

A three-member committee of the ministry's officials and members of the Maulana Azad Education Foundation has been constituted to chalk out the details of the institute in Alwar. The detailed project report will be prepared regarding construction and other aspects of the institute that will be established through Public Private Partnership (PPP) model, the statement said.

The Modi government's "empowerment without appeasement" policy in the past four years has ensured that a record three crore students belonging to the weaker sections of minorities benefit from various scholarship programmes, Naqvi said, adding that they included about 1 crore 63 lakh girls.

Naqvi also said that school dropout rate among Muslim girls, which was earlier more than 70 per cent, has been reduced to about 35-40 per cent due to awareness and educational empowerment programmes of the government.

"Our goal is to bring it down to zero per cent," he said. In the past year, thousands of educational institutions of all minority communities including madrassas, have been included in the mainstream education system by connecting them with '3Ts' -- Teacher, Tiffin, Toilet.

More than 5,43,000 youths have been provided employment and employment opportunities through various job-oriented skill development schemes.