India   All India  01 Oct 2018  One of PM Modi's brothers drives auto rickshaw, another is a grocer: Tripura CM
India, All India

One of PM Modi's brothers drives auto rickshaw, another is a grocer: Tripura CM

Deb lauded their humility saying that despite Narendra Modi having been PM for for 4 yrs and CM for 13 yrs, his family lived a simple life. 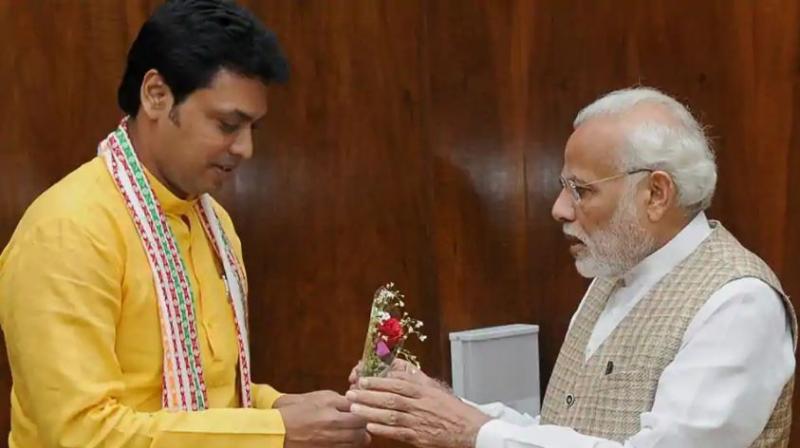 The CM made the comments in an effort to explain that poverty was not a curse. He added that poor thoughts was the true evil and added that every one should learn from the PM. (Photo: PTI)

Agartala: Tripura Chief Minister, Biplab Deb came out with yet another confusing statement on Monday, announcing that one of Prime Minister Narendra Modi's brothers drives an auto rickshaw while another is a grocer.

"He (Modi) has an elderly mother, but she does not stay in the Prime Minister's House.  He has a brother who still drives an auto rickshaw, His mother lives in a 10 by 12 room." Deb said, according to an NDTV report.

Biplab Deb lauded their humility saying that despite Narendra Modi having been the PM for for 4 years and before that, the Chief Minister for 13 years, his family still lived a simple life.

"Tell me, is there any other Prime Minister like this in the world?" he asked the audience.

The CM was addressing a gathering for a Parakram Parv event,  to commemorate the two year anniversary of the surgical strike, when he made the comments in an effort to explain that poverty was not a curse. He added that poor thoughts was the true evil and added that every one should learn from the PM.

Deb said that he too came from a poor family, but had been elected as Chief Minister because he was "not poor from heart", according to a Hindustan Times report.

While this message may be called meaningful, the CM's example of choice seems to have missed the mark somewhat is terms of factual accuracy. The Prime Minister does have several siblings, but none of them drive an auto rickshaw. Additionally, his mother lives with his brothers in Gujarat.

This comment is just the latest in a series of bizarre statements that the Tripura CM has come out with. In August he had announced that 50,000 ducklings would me made available to families in and around Rudrasagar at subsidised rates. He then elaborated on the benefits of ducks by stating that they automatically increse the oxygen level of a waterbody.

"When ducks swim in water, oxygen level automatically increases in the waterbody. It (oxygen) gets recycled. Fish in the water will get more oxygen. They also benefit from the bird droppings. Thus, pisciculture will benefit and fishes will grow faster, that too in a completely organic way.” he had said.

Earlier memorable and strange comments include his claim that the Internet and satellite communication had existed in the days of the Mahabharata and that former Miss World Diana Hayden did not represent Indian beauty.

On another occasion, he had suggested that the youth of Tripura should open paan shops or milk cows instead of seeking government jobs.