CJI Dipak Misra also said that young lawyers were assets having a potential to develop the jurisprudence. 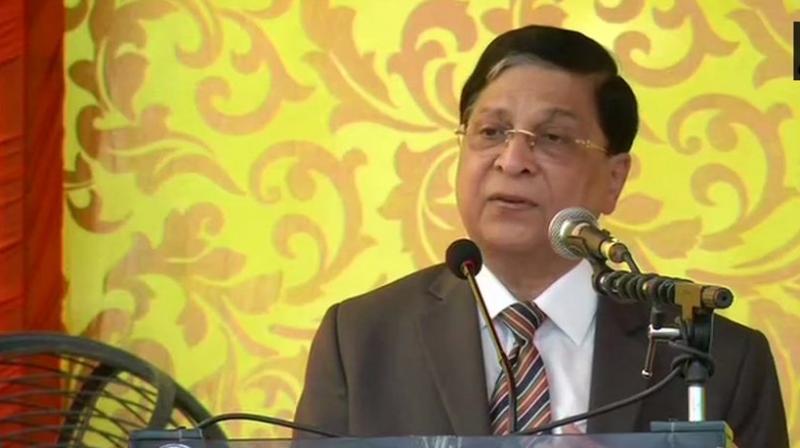 New Delhi: The outgoing Chief Justice of India Dipak Misra, who was given a farewell by the bar and Bench, said Indian judiciary ois ne of the most robust and strongest institutions in the world in the face of attacks and even in troubled times.

In his farewell address, Justice Misra said, “Our judges are ahead than their counterparts in other parts of the world. Justice must have a human face and must be insulated from destructive forces.”

Justice Misra who is due to retire on Tuesday after a successful tenure of over seven years is leaving an indelible imprint as a fearless and courageous judge, who fought for women’s empowerment and gender justice. He was given a warm farewell by the members of the Bar and the Bench at a function organised by the Supreme Court Bar Association on his last working day.

Justice Misra said young lawyers were assets having potential to develop the jurisprudence.

CJI Misra who had delivered a series of key verdicts including the one on Aadhaar and de-criminalising homosexuality, said truth has no colour and it is not as it is made to appear.

Paying rich tributes Justice Gogoi said, “Justice Misra  has displayed remarkable erudition and fortitude ever since he was elevated to the Bench. His greatest contribution has been in Constitutional law particularly concerning civil liberties. What we should we wear, eat, believe etc are issues which cut and divide us. So what is it that unites us? Without doubt it is the Constitution. Whenever we are in doubt, it is Constitutional morality which should guide us.”

The Chief Justice of India-designate Ranjan Gogoi, who will take over from Justice Misra from October 3, said Justice Misra’s greatest contribution has been to civil liberties and he has continuously upheld the freedom of individual and freedom to choose and he has supported women’s rights.

He cited Justice Misra’s judgments against mob lynching, abolition of section 377, national anthem and honour killings among others. Justice Gogoi said “What we should we wear, eat, believe etc are issues which cut and divide us. So what is it that unites us? Without doubt, it is Constitution.”

Justice Gogoi said that he will continue in the footsteps of a judge who has played a part in settling several challenging cases. He said the Supreme Court not only has to manoeuvre difficult legal questions but also nudge society into thinking constructively.

"In times of great political churning, alongside huge diversity of thought and opinion, we are divided, perhaps more than ever, by lines of caste, religion, ideology... these are issues that cut and divide us. They make us hate those who are different. The challenge is to protect a common world view," Justice Gogoi said.

Stressing the importance of holding true to constitutional ideals, Justice Gogoi said failure to do so would result in people continuing to "kill and hate each other". But the judges of the Supreme Court are committed to protecting these ideals, and "will remain committed", he added.

Attorney General K K Venugopal said the number of judgments CJI Dipak Misra has written in the last week is perhaps a record; time and again he has dealt with gender issues, he has been named “gender warrior” by some newspapers.

Legal justice delivery should be improved. Glad that CJI Designate Ranjan Gogoi said that he will be trying to tackle pendency, the AG added.