The social activist has made it clear that she won’t back out until a concrete plan is laid out for the rehabilitation of those affected. 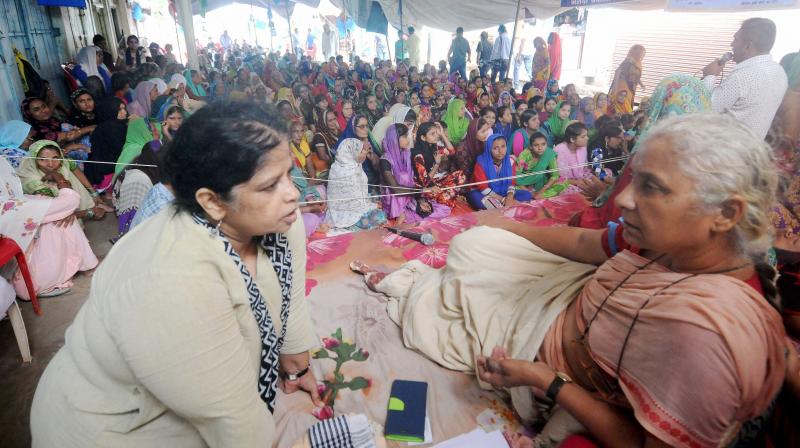 The government has not succeeded in making Medha Patkar call off the agitation so far. (Photo: PTI)

The principal demand of Medha Patkar's Narmada Bachao Andolan (NBA) is that the gates of the dam be kept open till the time 32,000 affected people in the submerged area are rehabilitated.

It also wants the government to keep in abeyance the Narmada Control Authority's directive to fill to its optimum level of 138.68 metres, and instead maintain it at 122 metres.

The government has not succeeded in making Medha Patkar call off the agitation so far. Madhya Pradesh Home Minister Bala Bachchan met her with a request in this regard on August 29, after which Chief Minister Kamal Nath tried convincing her to wind up the hunger strike over the phone.

The social activist has made it clear to the government that she won’t back out until a concrete plan is laid out for the rehabilitation of those affected.

The NBA and the villagers have both warned that they will only intensify the struggle if the government does not give in to their demands.

Heavy rain and rising water levels in the Sardar Sarovar Dam have affected thousands of villages along the Narmada river on the Gujarat-Madhya Pradesh border. At least 80 villages across the three districts have been flooded, with the dam's water level crossing 133.5 metres due to the Gujarat government's reluctance to release water.

"At least 192 villages and a town may go under if the dam's water level breaches the 138-meter mark. The rehabilitation of people in these parts is not even complete," NBA member Rahu Yadav said.