Justice Ranjan Gogoi is expected to take oath on October 3 and will be the Chief Justice till November 17, 2019. 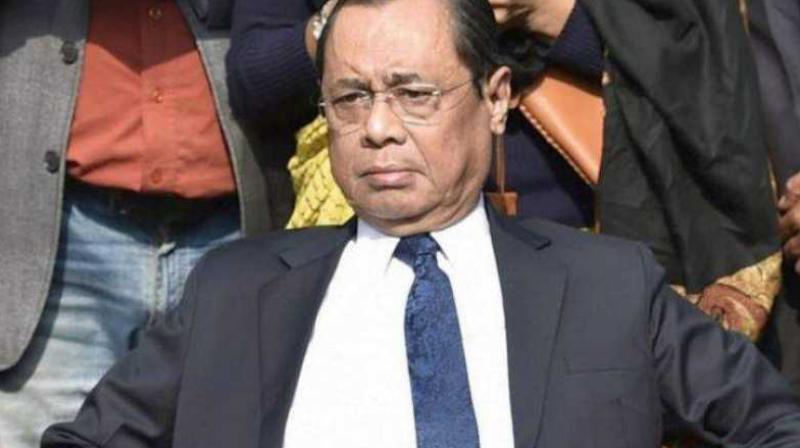 According to reports, Chief Justice of India Dipak Misra has recommended Justice Gogoi's name to the government as his successor. (Photo: File | PTI)

Highly placed sources told The Asian Age that the letter of recommendation will be delivered to the Union Law Ministry on Sunday.

The recommendation is likely to be approved by the Government and Justice Ranjan Gogoi is expected to take oath on October 3.

Earlier, the Union Law Ministry has sent a communication to CJI Dipak Misra to recommend the name of his successor so that it could commence the process of appointment at least three weeks before Justice Misra demits office. Normally the recommendation is sent a month before the CJI demits office.

Justice Gogoi will be the Chief Justice till November 17, 2019 till his retirement.

There was speculation over Justice Gogoi's appointment as the next CJI following an unprecedented press conference by four senior-most judges, including Justice Gogoi, in January this year when they had criticised Justice Dipak Misra over various issues, especially the manner of allocation of cases to certain benches. It was feared that Justice Gogoi might be superseded.

Under the Memorandum of Procedure evolved under the collegium system, it is customary and a convention for the outgoing CJI to name the senior most judge as his successor. There have been two attempts earlier to bypass the convention or “supersede” judges, after Independence.

The first “supersession” was in 1973 involving three judges. The then Prime Minister of India, Indira Gandhi appointed Justice A N as the CJI overlooking the three senior most judges of the Supreme Court, Justices J M Shelat, A N Grover and K S Hegde.

The second and possibly most infamous supersession, happened during the height of the Emergency, when Indira Gandhi disapproved the dissenting judgment of Justice H R Khanna and Justice M H Beg was appointed as the CJI.

Justice Ranjan Gogoi is now heading the special bench that is monitoring the updation of National Register of Citizens (NRC) in Assam to identify citizens and weed out illegally settled foreigners. He is also part of the bench monitoring the appointment of Lokpal and Lokayuktas in various States.

To curtail government expenditure on advertisements Justice Ranjan Gogoi had put curbs on glorifying the achievements of politicians and laid down new norms.

On Thursday he delivered a landmark verdict holding that a scheduled caste in one State is not entitled to claim the benefit of quota in another State on his migration.