No end to storm over Tripura govt’s dress code diktat 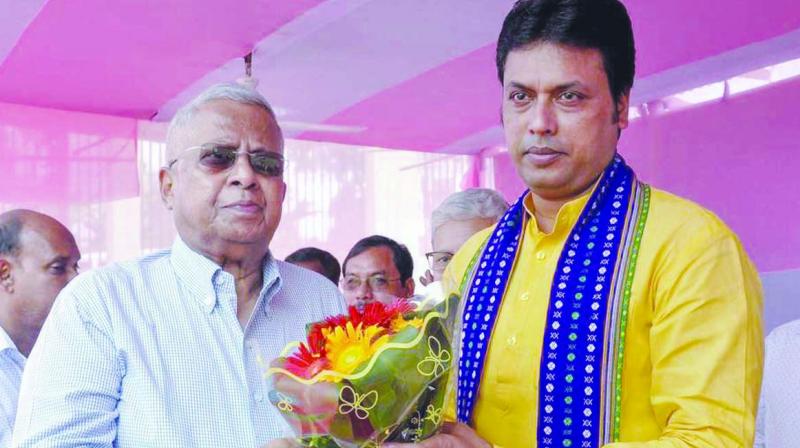 Tripura government headed by chief minister Biplab Kumar Deb has issued a diktat to officials not to wear casual attire and avoid reading or sending messages on their mobile phones during high-level meetings.

Guwahati: In what has sparked a controversy in the frontier state of Tripura, the BJP-IPFT government has directed its bureaucrats to follow a dress code which bars them from wearing jeans, denim wear and sunglasses while on duty, especially during high-level meetings.

The direction was given in a memorandum issued by Sushil Kumar, the principal secretary for revenue, education and information, and cultural affairs. “District magistrates, ADMs being the district head need to ensure that in/at the state level official meetings which are chaired by the honorable chief minister, deputy CM, ministers, chief secretary etc. or other high-level official meetings, due regards need to be given to the dress code,” the memorandum said.

Under the dress code, “certain casual attire like jeans and cargos pants should be avoided,” the memorandum stated. It also asked officials not to read or send messages on mobile phones during meetings, as it is “a mark of disrespect”.

The diktat has come under criticism from the Opposition as Tripura Pradesh Congress vice-president Tapas Dey said that it reflects “feudal mindset” of the state’s BJP-IPFT government.

The CPM spokesperson Goutam Das said the memo was against the democratic nature of the country. “This is not a colonial regime any more. How can they give orders on what to wear and what to avoid in the name of dress codes? This is most condemnable,” Mr Das said.

In August 2017, after the high court pulled up an officer for attending court in a shirt and denims, the Himachal Pradesh government has set in place certain rules for bureaucrats, prescribing a dress code while attending court.

The decision by the state government to pull up the two officers was also criticised by the Opposition parties then. However, there are no clear rules directing as to what type of clothing officers are supposed to wear while receiving the Prime Minister. It is customary to wear a “bandhgala” popularly known as “Nehru Coat”.

Though, state bureaucrats are tight-lipped about the dress-code diktat, some of them suggested that the government should define the code for the bureaucrats.

An official pointed out that there have been instances of some governors, mostly retired Army officers, inviting guests for Republic Day’s customary tea party in formal dress. However, governors, not from Army background, avoid such directives, he said.