The BJP and other political groups strongly deny the charge that Gujjars and Bakarwals are being harassed by the majority community. 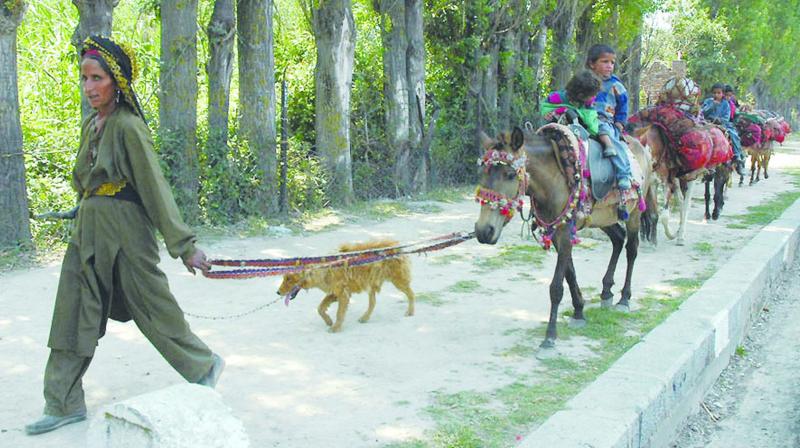 A nomadic family travels in search of a new base in Jammu and Kashmir. (Photo: H.U. Naqash)

About 20,000 tribal families have left J&K during the past two decades but the migration has seen a rise in the recent past. Community leaders have urged new governor Satya Pal Malik to ensure no more nomadic families leave the state permanently.

Srinagar: Families of nomadic tribes like Gujjar and Bakarwal of Jammu and Kashmir are silently but steadily migrating permanently to neighbouring states of Punjab and Himachal Pradesh and also to Haryana and Uttarakhand.

The reasons range from communal tension, shortage of fodder and space for their livestock, denial of rights over forests, restrictions on the use of government land, insurgency, curbs imposed by Army on their movement in upper reaches including those falling close to the Line of Control (LoC).

Harassment by other communities and communal tension, which peaked after the alleged gang rape and murder of an eight-year-old Bakarwal girl in Rasana village of Kathua district in January, is said to be among the top reasons for the spike in exodus.

Gujjars depend mainly on agriculture and rearing buffaloes, cows and other animals whereas Bakarwals earn their livelihood exclusively from sheep rearing. Almost all of them are Sunni Muslims.

A limited number of families of the two tribes own homes or lands or both in some parts of the state but they as well as others traditionally move between the pastures of Kashmir Valley and the Jammu region along with their livestock with the change in season.

Of late, however, a silent exodus of particularly Gujjar mainly from Jammu, Samba, Kathua, Kishtwar and Udhampur districts to neighbouring states of Punjab and Himachal and far off Haryana and Uttarakhand has been reported, causing worry among the leaders of the twin tribes.

“It is a very serious matter for J&K particularly the tribal people. They are being thrown out of the forest and other government owned lands. They are basically nomadic tribes who don’t have any lands of their own,” said Dr Javaid Rahi of the Tribal Research and Cultural Foundation (TRCF).

He said it were mainly the “Banhara” Gujjars - those who live in forests - who are migrating to the other states permanently. “The exodus started a few years ago. They find Punjab, Himachal, Haryana and Uttarakhand better places to live in. They are being received by the people of these states with open arms as they need fresh and unadulterated milk and other dairy products which they alone can provide them,” Mr Rahi said. He added that already a large number of Gujjars from J&K are putting up in makeshift homes in Uttarakhand between Rajaji National Park and Gaindi Khata, Haridwar.

He cited extreme shortage of fodder, lack of space for their animals, sense of insecurity and harassment at the hands of some unscrupulous elements” as main reasons for the exodus.

The gang rape and murder of the minor Bakarwal girl at Rasana and the alleged harassment of the nomadic tribes at the hands of rightwing Hindu activists and their supporting bands following the gruesome incident triggered migration of a large number of families from Kathua and neighbouring districts, community leaders said.

Communal tensions were brewing in Jammu and its neighbourhood much before the Rasana incident over a variety of issues on which the region’s Hindu and Muslim political leaderships held divergent and even conflicting views. The tensions were set off afresh earlier this year after the authorities launched what they claimed was an anti-encroachment drive.

Gujjar activists alleged that there was “clear anti-Muslims bias” behind the drive as illegal hutments and community centres belonging to the Hindu community on forest land in Jammu, Kathua, Samba and Rajouri districts were not touched. They blamed former forest ministers Choudhary Lal Singh and Bali Bhagat for it.

Gujjar leader and National Conference (NC) MLA Javed Ahmed Rana alleged that the BJP and its allies have, under a “well-planned strategy”, succeeded in “instilling fear” among minorities, particularly Gujjars and Bakarwals in Jammu and surrounding districts.

“Unfortunately, the state government failed in running the administration in accordance with spirit of our pluralist Constitution particularly in Samba and Kathua districts,” he alleged.

The BJP and other political groups strongly deny the charge that Gujjars and Bakarwals are being harassed by the majority community. They say that in reality these tribes have over the years come down to Jammu planes from the hilly areas of the state and indulged in land grabbing and term it as “demographic invasion”.

Allegations and counter allegations apart, Gujjar leaders have now advised nomadic families not to migrate permanently to other states and instead fight for their rights within J&K. Community elders were also involved in one such programme organised by TRCF in Jammu recently.

“About 20,000 such families have left the state during the past two decades but the migration saw a rise in the recent past,” Mr Rahi said.

“We want that the Gujjars and Bakarwals should instead of leaving this place fight hard for their constitutional rights within the State. A sympathy wave towards nomadic issues is evolving rapidly in power corridors and we have to wait for a better deal from the government,” he said.