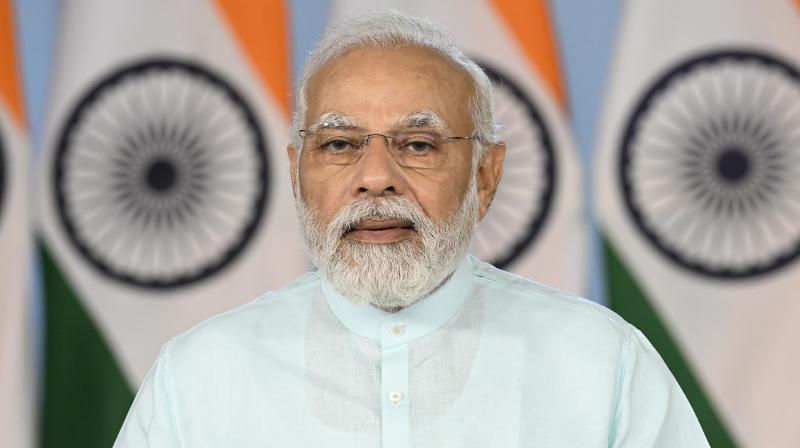 New Delhi: In his monthly “Mann Ki Baat” address on Sunday, Prime Minister Narendra Modi hailed the sacrifices of India’s heroic freedom fighters. Offering his “humble tributes” to the revolutionaries who made numerous sacrifices for the country, Modi said that he is happy to note that “Azadi Ka Amrit Mahotsav” is taking the form of a mass movement. He urged people to put “tiranga” as the profile picture on their social media platforms between August 2 and 15.

The PM said India will “witness a splendid and historic moment” as the country celebrates the 75th anniversary of Independence on August 15 this year.

Calling the 91st episode of Mann Ki Baat special, Modi said, “The Almighty has blessed us with this great fortune. Think about it... Had we been born in the era of slavery, then how would we have imagined this day? That yearning for freedom from slavery, that desperation for freedom from the shackles of subjugation, how formidable it must have been!”

The PM exhorted the nation to remember that millions of our countrymen fought for independence every single day and sacrificed for the sake of freedom.

He said imagine waking up every morning dreaming about India’s independence and eventually dedicating our lives to the freedom movement, chanting “Vande Mataram” and “Bharat Maa Ki Jai” for a better future for our country and the generations to come.

He said, “75 such railway stations have been identified spread over 24 states across the country. These 75 stations are being decorated very ornately. Many types of programmes are also being organised on these stations. You should also take out time to visit one such historical station in your vicinity.”

Mr Modi added, “Gomoh Junction in Jharkhand is now officially known as Netaji Subhas Chandra Bose Junction Gomoh. Do you know why? Actually, at this very station Netaji Subhash was successful in dodging British officers by boarding the Kalka Mail. All of you must have heard the name of Kakori Railway Station near Lucknow. The names of brave hearts like Ram Prasad Bismil and Ashfaq Ullah Khan are associated with this station. The brave revolutionaries had displayed their might to the British by looting the treasury of the British being carried by train. Whenever you talk to the people of Tamil Nadu, you will get to know about Vanchi Maniyachchi Junction in Thoothukudi district. This station is named after the Tamil freedom fighter Vanchinathan ji. This is the same place where Vanchi, 25 years of age then, had punished one British collector for his actions.”

Referring to the heroism of Indian freedom fighters Mr Modi further said, “Friends, on July 31, all of us countrymen salute the martyrdom of Shaheed Udham Singh ji. I offer my humble tributes to all such other great revolutionaries who sacrificed their all for the country.”

The PM also expressed his happiness over Azadi Ka Amrit Mahotsav taking the form of a mass movement. “People from all walks of life and from every section of society are participating in different programmes connected with it. One such event took place in Meghalaya earlier this month. People remembered the brave warrior of Meghalaya, U. Tirot Singh, on his death anniversary. Tirot Singh ji fiercely opposed the British conspiracy to control the Khasi Hills and destroy the culture there,” he said.