Welcoming the fountainhead, Bharatmuni, on Gurupurnima

Bharata’s Natya Shastra sowed the seeds of knowledge in dramaturgy and the Rasa theory of aesthetics. 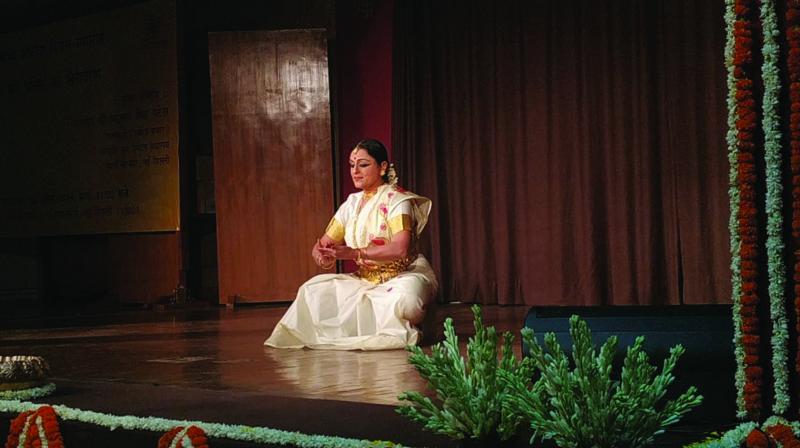 The statue of Bharata; Deepti Bhalla

What more fitting observance of Gurupurnima can an art institution conceive of than a statue of the fountainhead of Natyaveda, Bharatmuni, being installed on its premises? Whether Bharata denoted a person or whether the syllables of the term represented different disciplines or whether it was a reference to the country or whether the Natya Shastra by Bharata is a compendium of articles and not one person’s work have all been debated upon. The unity of thought in the eight chapters of the text would seem to suggest one author alone.

Now residing at the top of the steps leading to the main building of the Indira Gandhi National Centre for the Arts, this statue of Bharatmuni has a history which begins when Sacchidananda Joshi, member secretary, happened to see what Dr Padma Subrahmanyam in the memorial to Bharata had in her own creative imagination got fashioned as a representation of the legendary genius.

Mr Joshi’s conviction that a replica of this image must grace the IGNCA led to a search for the sculptor who spent three years on the task, but thereafter disappeared. Finally, a husband and wife team from Karnataka, S. Ratna and Venkatraman Bhatt, was commissioned and they finished the job following which the statue was painstakingly transported by road from Bengaluru to Delhi.

Covered in floral garlands, the figure was formally installed with due ceremony and ritual on the auspicious day of Guru Purnima. Bharata’s Natya Shastra sowed the seeds of knowledge in dramaturgy and the Rasa theory of aesthetics, the practice of which leads to bliss or brahmaananda. The Bharata sculpture is not carved as an image per se but rather revealed as a once-hidden form on a surface, making it stand out by removing all that is unnecessary. 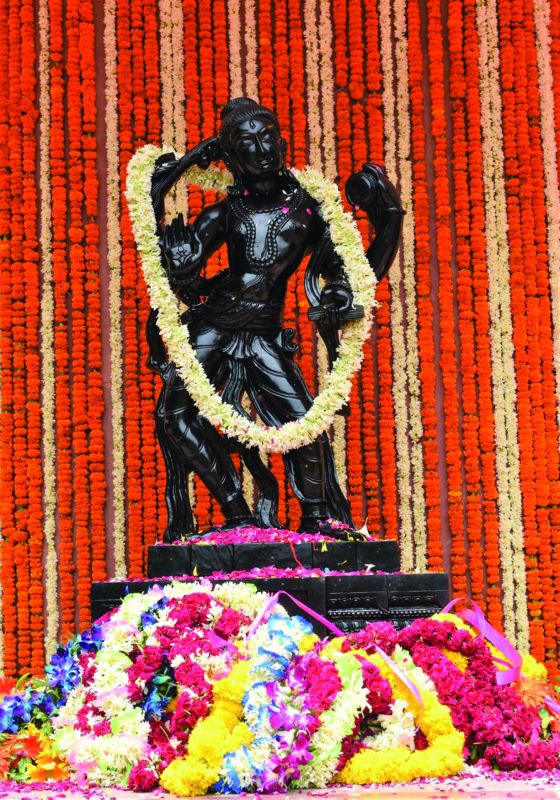 The statue of Bharata; Rajendra Gangani

A brief interaction with Dr Subrahmanyam gave me a better understanding of the iconographic details. Bharatmuni as a figure, for me, would be like Dakshinamurthy, the guru among gurus. The invocation, “Om Sri Gurubhyo Namah”, has, by convention, a plural connotation, representing a whole parampara or unbroken chain of gurus in a discipline.

The statue is conceived in the Vaishnava stance, with four hands. The veena in the upper right hand represents all music and knowledge. In the opposite left hand that is raised is the drum representing vachikabhinaya (which can be poetry and languages). The lower right hand is held in chinmudra, symbolising the satvik quality, and the lower left holds a folded scroll.

“Shilpa shastras have four symbols and the upaveda of Bharata had to have the symbol of the kokku (crane) which, given its ability to stand motionless for hours on one leg before it snatches its prey of fish, represents undiluted concentration and meditative power. So in the pedestal you will find the crane present not as vahana but as a symbol,” said Dr Subrahmanyam.

She added that “the sannidhi (sanctum sanctorum) of the Bharata Memorial near Chennai was inaugurated by Guru Kalyanasundaram and Sri Sri Ravi Shankar inaugurated the museum two years later. It has the priceless “100 years of Indian dance” from the Mohan Khokar collection, which Saroja Khokar has very graciously donated”.

After Dr Advaitavahini Kaul’s introductory remarks, voicing their responses to the occasion, scholar Bharat Gupt expressed satisfaction at the fitness of Bharatmuni having a dominant presence in IGNCA and affirmed that this encyclopedic text for him was a representation of India as a nation. Denying the existence of anything like “Sanskrit Theatre”, he maintained that classical theatre in India was not in Sanskrit but in Prakrit, the spoken language. Then what does one call, I wondered, the Kutiyattam dialogues in full-blown Sanskrit as given in Shaktibhadra’s plays like Ascharyachoodamani? Surely that is a vestige of Sanskrit Theatre.

Chairman, IGNCA, Ram Bahadur Rai felt that a natyamandap (auditorium), as stipulated in the Natya Shastra, was still missing from the premises.

Referring to as “intangible heritage” the wisdom of the Natya Shastra, artiste Sonal Mansingh, trustee, and Rajya Sabha member, mentioned that the Upper House would gain from the vibes of Bharatmuni at a time when “artists are an endangered species”. Talking about environmental degradation and climate change, she said it is very necessary for the arts today to reflect on core issues.

Mallapuram G. Venkatesh, ex-head of Karnataka Sanskriti Vishvavidyalaya, read out a paper (Grantha Vimochan) with emphasis not on the Natya Shastra but on Manasollasa by Kalyana Chalukya monarch Someshwara III, belonging to a much later period. While Natya Shastra was an earlier work, Someshwara’s work, taking off from the Shastra, is also of an encyclopaedic nature, the comprehensive treatment dealing with the desi, including the margi, by Bharata though the author himself does not explicitly mention the words. Later scholars Sarngadeva of Sangit Ratnakara and Jayapa of Nritya Ratnavali, both of the 13th century, who discussed desi were indebted to Someshwara. Referring to the multifaceted nature of this work, G. Venkatesh spoke of what he called “dissemination of Kannada through Sanskrit”.

A short but neatly choreographed Mohiniyattam presentation at the end Deepti Bhalla present an Ardhanari Stotram, of unknown authorship, which Leela Omcherry chanced upon while studying the ancient literature of Kerala. Incidentally this is the only shlokam on Ardhanariswar found in Malayalam. The music was set by her in Madhyamawati, Sama and Kamboji and Chempada talam. The slow grace of Deepti’s Mohiniyattam brought out the complementary contrasts of the male and female principles. The next item was a very neat group rendition by four of Bhalla’s well-taught disciples, a Swati Tirunal Kriti, which again is a very rare composition. The tune was “Jaya Jagadeesha Nanda Kishor” in Yamuna Kalyani. That a Swati Tirunal composition should have been set, not to Kalyani but Yamuna Kalyani from the Hindustani tradition, is unusual.

Gurupurnima signifies for Kathak dancer Rajendra Gangani and his illustrious brothers a homage to their father, Kundanlal Gangani, who incidentally was born on the Gurupurnima of 1926 and died on the Gurupurnima of 1984. A leading Jaipur gharana exponent, whose guru was his maternal uncle, Narayan Prasad, Kundanlal started performing at the tender age of eight, giving recitals at the royal courts of Raigarh, Khairagarh, Baroda and Jaipur, and in cities like Allahabad, Mumbai and Pune. His last performance was in Jodhpur in 1960. Joining the Kathak Kendra in Delhi in 1970, he taught in the institution till his death in 1984.

A firm believer in the solo format in Kathak, he considered both the Lasya and Tandav angs of Jaipur gharana Kathak equally important. He introduced gat, usually performed in drut laya, in the vilambit laya, wedding them with parana, creating unique pieces. His individualistic style lay in introducing chalan and qayada techniques in footwork and incorporating a chhanda prelude at the commencement of a thumri. His specialised in choreographing chaubandi and tribandi work.

Following a tabla prelude by Fateh Singh Gangani, Gurur pooja salutations by Rasraj Foundation to Guru Kundanlal at the Kamani auditorium began with Jyotika Joshi and Nivedita khot of Singapore Fine Arts, performing in Taal Ashtamangal. The two dancers interacted well with the frozen points, exploiting levels in their dissimilar heights for visual aesthetics. With Dhirendra Tiwari’s parhant and percussion by Fateh Singh and Samiullah Khan’s vocal support, the 11-matra taal did not lack for the right accompaniment and presented a precise projection.

The highlight of the evening was a classical music offer involving Jaltarang by Pandit Milind Tulankar, tabla by Ram Das Palsule and djembe by Ustad Taufiq Qureshi. The performance more than compensated for the rather long time taken to set the stage (to adjust the exact sruti and faithful tone of notes in Jalatarang). Never have I heard alap, jod and jhala in Puryadhanashree followed by the bandish “payaliyan jhalakan” sound so melodical when played on this instrument. An altogether rare and unique tribute to Kundanlalji indeed!

Rajendra Gangani’s brief but immaculate recital included the guru’s Ganesh Paran. The manner in which the ‘dha’syllable was placed in a composition concluding with a Surdas pad, “Gurubina aise kaun kare”, was an important statement.

The finale was an exciting confluence of Rajendra Gangani and other performers. The music was a one-line literature in Teental on Natwar Krishna in the form of a lehera into which permutations and combinations of tihais of kavits referring to the Radha/Krishna/Yamuna lore were woven in. It evoked handsome bouts of applause.