'It was my mom’s dream to have me pilot on her last flight as an Air Hostess with Air India,' Ashrrita wrote. 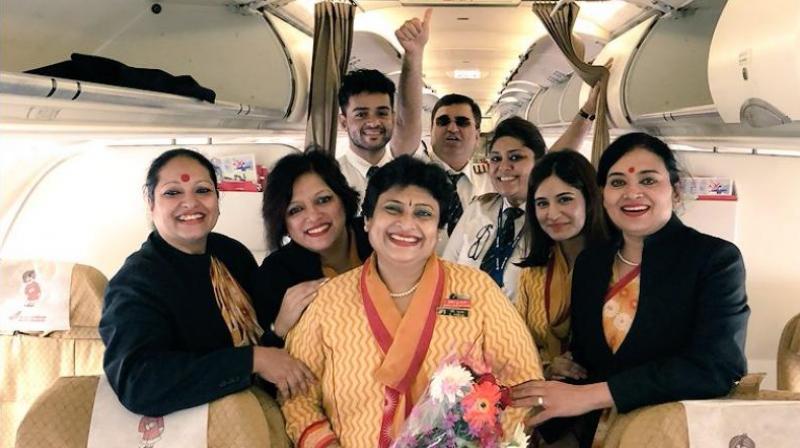 A photograph of Pooja Chinchankar on her last flight as an air hostess with Air India. (Photo: Twitter | @caramelwings)

Mumbai: Air India pilot Ashrrita Chinchankar was 'happy and overwhelmed' to be able to fulfill her mother's dream and carry on her legacy. Ashrrita piloted her mother Pooja Chinchankar's last fight as an air hostess with Air India from Bengaluru to Mumbai.

Taking to Twitter, Ashrrita wrote: "So happy and honoured to be able to pilot the one flight that mattered. It was my mom’s dream to have me pilot her last flight as an Air Hostess with @airindiain :) As she retires after her glorious 38 years of service, I will be carrying on with her legacy."

So happy and honoured to be able to pilot the one flight that mattered. It was my mom’s dream to have me pilot her last flight as an Air Hostess with @airindiain :) As she retires after her glorious 38 years of service, I will be carrying on with her legacy 😇 #grateful #proud pic.twitter.com/zcUTNCENzj

While the flight was descending in Mumbai, Captain Paresh Nerurkar told passengers that the flight's senior-most air hostess, Pooja, was retiring on landing, having served AI for 38 years. He added that her legacy would be carried forward by Pooja's daughter who was with him, in the cockpit as co-pilot.

The news which surely must have melted hearts then saw Pooja walking down the aisle to the applause of the passengers and when the airbus landed, both mother-daughter duo stood on the aircraft greeting passengers as they left.

Ashrrita's tweet since being posted has garnered over 11 thousand likes and has been shared over 2,000 times. While many have commented to say how proud they are of the two women, others have sent wishes and love their way. Among the many people to respond to the touching tweet were Air India, businessman Harsh Goenka and Minister of State for Civil Aviation, Jayant Sinha.

#FlyAI : @caramelwings Our heartfelt wishes to your mother and you for this special flight when she passes the baton on to you to have the privilege of serving our passengers with dedication. The legacy lives on. https://t.co/AxJiFllPbv

An Air India air hostess of 40 years wanted her last flight before retirement to be piloted by her daughter Ashrrita Chinchankar. This came true yesterday. Passengers clapped, the staff cheered. Real life dreams are made by stories like this. #HelloHappiness pic.twitter.com/HXiKSWOcCb

A daughter's priceless gift to her mother.

Congratulations to the mother-daughter duo.👩‍👧https://t.co/hNdmNNcZCU

Ashrrita who developed an interest in aviation from a very young age went to Canada for pilot training in 2006. By the time she came back in 2008, the recession had begun and there were no jobs for pilots.

The family struggled to keep Ashrrita’s licence valid. Finally, in 2016, she got a job in Air India and joined the A320 fleet.

It turns out that for Pooja, her daughter becoming an AI pilot was a dream come true.

Ashrrita also shared a video of the emotional goodbye that her mum received from the cabin crew and passengers on her last flight:

For all of you who asked :) that’s mom on her last flight as an operating cabin crew for @airindiain what a lovely day and what amazing passengers! So many best wishes and hugs ♥️ of course I was in the flight deck :) #proud #grateful pic.twitter.com/eUL3Og4EBr