The petitioner has sought a direction to the CBI to register an FIR against the Bihar Chief Minister in the case. 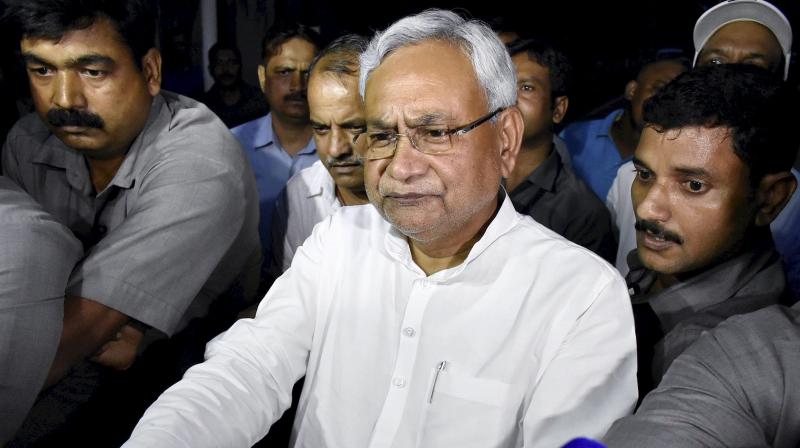 The plea alleged that there was a criminal case against Nitish Kumar wherein he was accused of killing a local Congress leader Sitaram Singh. (Photo: PTI)

New Delhi: The Supreme Court on Tuesday agreed to hear a plea seeking cancellation of Bihar Chief Minister Nitish Kumar's membership of the state Legislative Council for allegedly concealing a pending criminal case against him.

A bench of Justices Justice Dipak Misra, Amitava Roy and AM Khanwilkar said it will look into the matter after petitioner advocate ML Sharma sought an urgent hearing of his plea.

The bench said it would see when the matter could be listed for hearing.

The plea, which was filed on Monday, alleged that there was a criminal case against the JD(U) leader wherein he was accused of killing a local Congress leader Sitaram Singh, and injuring four others ahead of Lok Sabha by-election to the Barh constituency in 1991.

The petitioner has also sought a direction to the CBI to register an FIR against Kumar in the case.

"Respondent number 2 (Election Commission), despite knowing facts about his (Kumar's) criminal case, did not cancel his membership of the house and respondent (Kumar) still enjoys constitutional office till date," he said.

The lawyer has sought cancellation of Kumar's membership as per the Election Commission's 2002 order stating it is mandatory for candidates to disclose criminal cases against them in their affidavits annexed to nomination papers.

He claimed the Bihar chief minister did not disclose the criminal case that was pending against him in affidavits since 2004, except for 2012.