The MLA however strongly disapproved the celebratory firing by his alleged follower saying that he would no longer tolerate such incident. 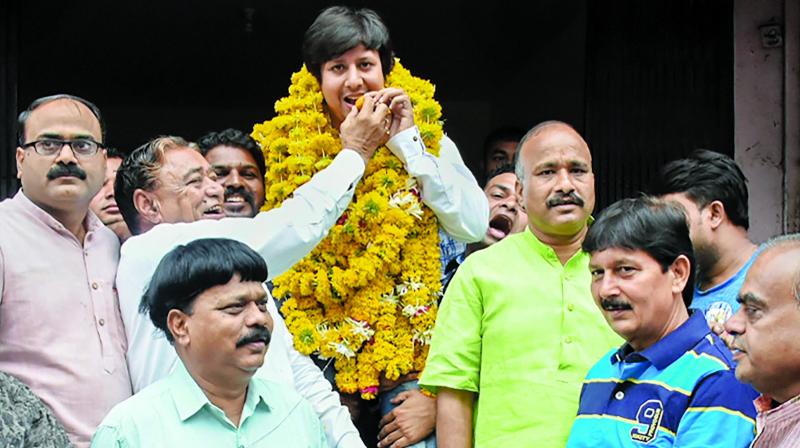 BJP MLA Akash Vijayvargiya is garlanded after being released from the district jail. (Photo: PTI)

Bhopal: Bharatiya Janata Party (BJP) legislator Akash Vijayvargiya whose bashing of a civic body officer with a cricket bat in full public glare in Madhya Pradesh’s Indore city four days ago had sparked national outrage, on Sunday said he was unrepentant over his action.

Incidentally, celebratory firing by his followers greeted his release from jail in Indore where he spent four days following his arrest in the incident on June 26, in the morning stirred fresh controversy.

“I have no regrets (for bashing the civic body officer). I do not feel guilty or embarrassed as I did it in public interest. But, I pray god that I do not get another opportunity to wield the bat. I will now try to follow Gandhian policy”, he told reporters as he walked out of the prison.

The first time MLA, son of BJP national general secretary Kailash Vijayvargiya, said he could not bear the sight of a woman being dragged by a male member of the team of civic body officers who had gone to demolish the ‘dilapidated’ house in Indore on June 26 and acted as per the demand of the situation.

Replying to a question, he said his father told him categorically that he had to take decision independently now and face the consequence of it, whether good or bad.

Meanwhile, gun shots, and sweet distributions by his followers marked his release from prison on bail on Sunday morning. He was granted bail by a Bhopal court late on Saturday evening.

Vijayvargiya junior straight drove in a car to BJP office in Indore city from jail after his release. At least five shots were fired on air by an enthusiastic follower to hail his reprieve.

The MLA however strongly disapproved the celebratory firing by his alleged follower saying that he would no longer tolerate such incident.