The state govt has called for a special session from July 4 to July 8 where the GST Bill will be debated and is expected to be passed. 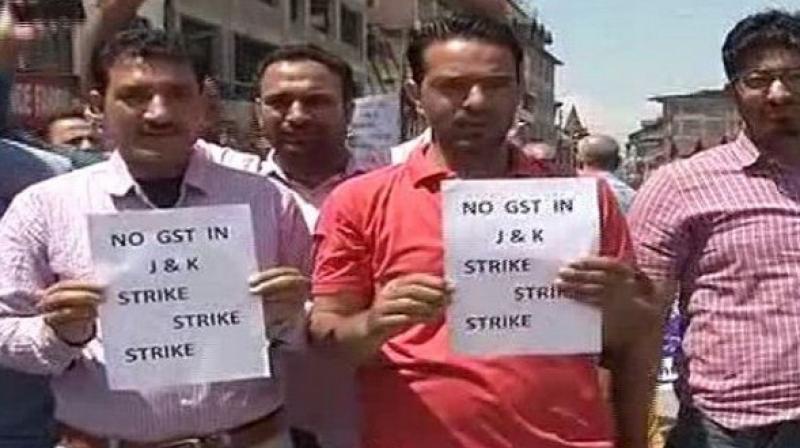 Srinagar: All shops and business establishments were closed and transport was off roads in Kashmir after traders and transporters called for a shutdown on the Goods and Service Tax (GST) issue.

As the state of Jammu and Kashmir enjoys 'special status' in the Indian Constitution through Article 370, traders, transporters and opposition parties have raised objections with regard to the implementation of the GST in the state.

However, the People's Democratic Party (PDP) - Bharatiya Janata Party (BJP) government has claimed that the 'special status won't be diluted in any case'.

Those opposed to the GST demanded some amendments to enjoy some benefits.

The state government has called for a special session from July 4 to July 8 where the GST Bill will be debated and is expected to be passed.

The Kashmiri Traders and Manufactures Association sat on protest against the one nation one tax policy under GST .They were demanding a separate GST tax for Jammu and Kashmir.

However, members of the Union Cabinet lauded Prime Minister Narendra Modi, Finance Minister Arun Jaitley and others for the successful rollout of the GST.

Earlier, hailed as the 'most ambitious economic reform' in India, the GST was launched during a midnight session of Parliament in the presence of President Pranab Mukherjee, Vice President Hamid Ansari, Prime Minister Narendra Modi and Lok Sabha Speaker Sumitra Mahajan and other dignitaries.

Ending more than 11 years of hectic argument between the Centre and states, the GST was passed and is now set to completely transform the indirect taxation landscape in the country, involving both central and state levies.

In a departure from the normal practice, GST will be administered together by the Centre and States.

The biggest tax reform since independence - GST - will pave the way for realisation of the goal of One Nation - One Tax - One Market.

It will benefit all the stakeholders namely industry, government and consumer as it will lower the cost of goods and services give a boost to the economy and make the products and services globally competitive, giving a major boost to 'Make in India' initiative.

Under the GST regime, exports will be zero-rated in entirety unlike the present system where refund of some of the taxes does not take place due to fragmented nature of indirect taxes between the Centre and the States.

However, GST will make India a common market with common tax rates and procedures and remove economic barriers. GST is largely technology driven and will reduce the human interface to a great extent. GST is expected to improve ease of doing business in India.