Italy hands over urns of 2 WWII soldiers to India

Ceremony organised to commemorate sacrifice by Indians during war. 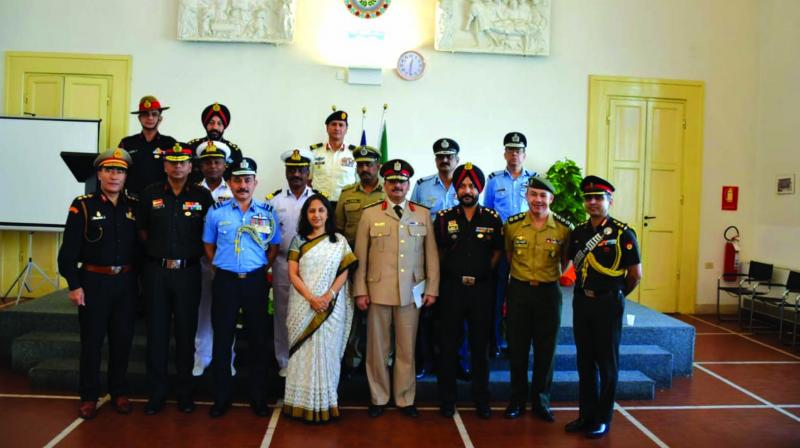 New Delhi: In a solemn ceremony organised in Prato, near Florence in Italy on Wednesday, urns of two Indian soldiers — Hari Singh and Palu Ram of the Indian Army — who participated in the World War II were presented to the Indian government.

The ceremony was organised to commemorate the sacrifice made by the Indian soldiers during the World War II. The bones of these two soldiers were found near Florence in 1996 from Indian area of the battlefield at Poggio Alto near Montale (Florence). The remains were exhumed and investigated by team of doctors. Based on the date of death, location of the remains, anthropometric and morphological examination, findings on boots worn and ammunition used, the researchers matched the Commonwealth records of missing soldiers to ascribe the remains to those of Hari Singh and Palu Ram of 4/13 Frontier Force Rifles.

Service documents of both the individuals were found in the Army records held with the National Archives of India. Based on details of heights provided, the correct identification of the two corpses could be carried out successfully and the remains of the soldiers were duly cremated. The ceremony for presentation of urns was organized on 29 May 2019 at Public Assistance, Prato (Florence). In addition to a sizeable presence from the community of Prato and the Italian Armed Forces, the ceremony was attended by the Mayor, President of Public Assistance and Prefect of Prato. Representatives of Common Wealth War Graves Commission, Red Cross Society and host of other dignitaries of Prato also attended the ceremony.

The Indian side was represented by Mrs Reenat Sandhu, the Ambassador of India and Colonel Rohit Teotia, the Defence Attache to Italy. 16 senior officers attending the National Defence College Course in India and on a study tour to Italy also represented India and attended the ceremony.

Ashes of these two soldiers will be scattered on 16 Jul 2019, in the Forli war cemetery where the other comrades from that battlefield have also been commemorated.

The contribution of Indian soldiers in the liberation of Italy during the Second World War is well known. Almost 50,000 Indian troops, mostly between the ages of 19 to 22, fought for the ‘Liberation of Italy’. The first Indian troops were landed at Taranto in the south of Naples on 19 Sep 1943. From then until 29 Apr 1945, they were engaged in a heroic mission. 5,782 made the supreme sacrifice during the Italian campaign. It is creditable that out of 20 Victoria Crosses awarded during this campaign, Indians received six Victoria Crosses.

The story of their bravery and their sacrifice is still talked about in Italian cities and villages that they helped to liberate. The Indian Soldiers lie in cemeteries all over Italy, in particular Sangro, Cassino, Arezzo, Forli and Rimini. The heroism of the Indian soldiers was visible in the battle to take Monte Cassino, battle for Sangro river and Liri Valley, the advance along the east coast to Bologna, crossing of Senio river and the battle of Gothic lines.