It said eight ministers have declared their educational qualification to be between 10th and 12th standard, while 47 are graduates. 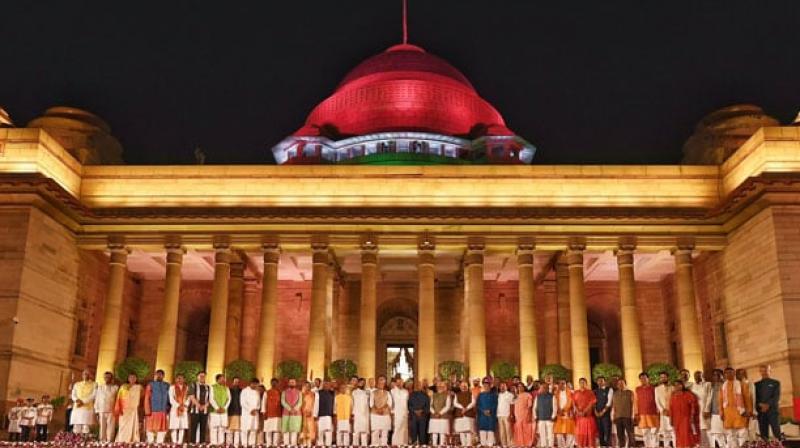 The ADR said 51 (91 per cent) of the ministers are crorepatis. On an average, each minister has assets worth Rs 14.72 crore.(Photo: ANI)

New Delhi: Of the 56 ministers who took oath on Thursday and are part of either the Lok Sabha or the Rajya Sabha, 51 are crorepatis and 22 have declared criminal cases against themselves, according to election watchdog Association for Democratic Reforms (ADR).

It said eight ministers have declared their educational qualification to be between 10th and 12th standard, while 47 are graduates. One minister holds a diploma.

The ADR released the findings after analysing affidavits of 56 of the 58 ministers, including Prime Minister Narendra Modi, from the 17th Lok Sabha and the current Rajya Sabha.

The details of Lok Janshakti Party chief Ram Vilas Paswan, who is the minister of consumer affairs, food and public distribution, and External Affairs Minister Subrahmanyam Jaishankar were not analysed as they are not members of Parliament currently.

The ADR said 51 (91 per cent) of the ministers are crorepatis. On an average, each minister has assets worth Rs 14.72 crore.

Only five ministers, including first-timers Kailash Chaudhary and Rameswar Teli, have declared assets worth less than Rs. 1 crore.

These also include Pratap Chandra Sarangi from Odisha's Balasore who is famous for his austere lifestyle. He has declared assets worth around Rs. 13 lakh, according to the ADR.

Eleven ministers are aged between 41 and 50, while 45 have declared their age to be between 51 and 70 years.