This meet would be the first occasion when Rahul will interact with party leaders since CWC meeting on May 25. 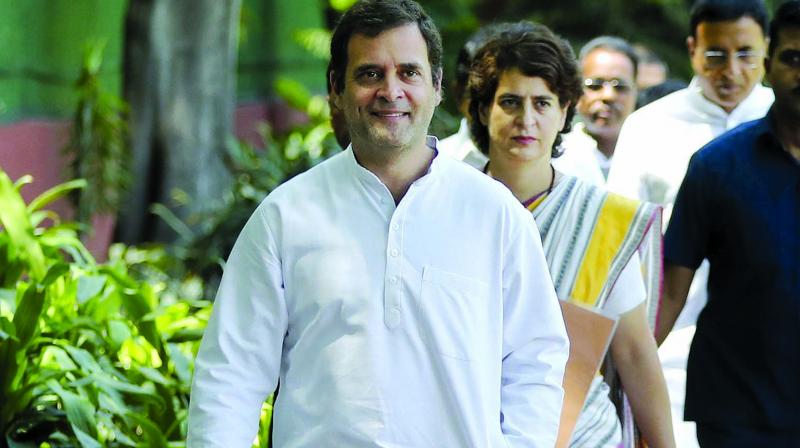 Nationwide demonstration were held urging Rahul Gandhi to rethink his decision to resign from the post of party president. (Photo: File)

New Delhi: The Congress Parliamentary Party (CPP) will meet on Saturday and will be presided over by UPA chairperson Sonia Gandhi. It will be attended by all Congress MPs, including party president Rahul Gandhi.

This meet would be the first occasion when Rahul will interact with party leaders since CWC meeting on May 25 in which he announced his decision to quit from the post of party chief. The decision was rejected by the party’s highest decision-making body.

Nationwide demonstration were held urging Rahul Gandhi to rethink his decision to resign from the post of party president.

The CPP may also elect a new chairperson, a post currently held by Sonia Gandhi.

A senior leader said calling a session of the All India Congress Committee (AICC) would give an opportunity to Rahul to interact directly with 2,000-odd delegates from across the country.

As per the Congress constitution, all CWC resolutions have to be ratified by the AICC. “AICC is the appropriate forum where Rahul Gandhi can put his views before the delegates and announce his future plan,” the leader said.

Since the CWC meeting on May 25, Rahul Gandhi has had just a few brief interactions with party colleagues.

On Wednesday, Rahul Gandhi did not meet Delhi Congress president Sheila Dikshit who, along with other party colleagues and workers, staged a sit-in outside his residence to plead with him to reconsider his resignation offer. She conveyed the message through one of his aides.

Also on Wednesday, a photo went viral of Rahul Gandhi taking out his pet, Pidi, on a ride.

The Congress has last faced such a crisis back in 1999, when Sonia Gandhi, just months after being named party president, quit over three senior leaders, Sharad Pawar, PA Sangma and Tariq Anwar objecting to her leadership on account of her foreign origin.