AAP calls EC’s hackathon a ‘farce’; to hold its own on same day

Terming the EC’s challenge as farce, AAP MLA Saurabh Bharadwaj said Nasim Zaidi is also welcome to their hackathon, according to a report. 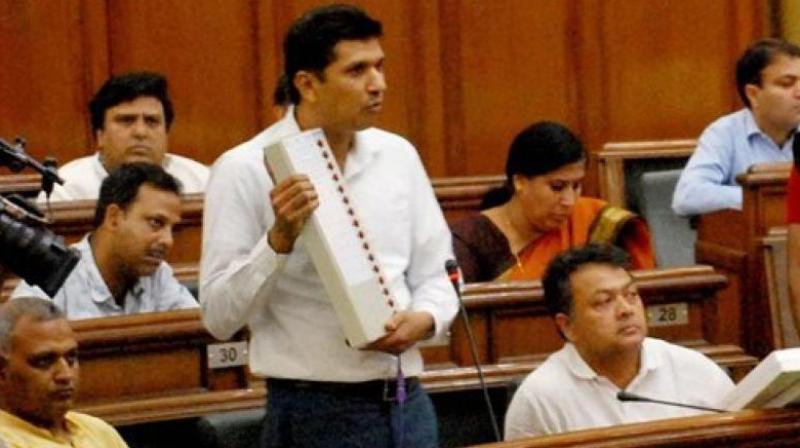 While AAP was the most vocal with their ‘tampering’ allegations, they declined to participate in the EC challenge, stating that the rules are too restrictive. (Photo: PTI/File)

New Delhi: Aam Aadmi Party is set to hold an Electronic Voting Machine ‘Hackathon’ on Saturday, the same day when the election commission is going to host a challenge for parties to prove allegations of tampering.

Terming the EC’s challenge a farce, AAP MLA Saurabh Bharadwaj said the Chief Election Commissioner Nasim Zaidi is also welcome to their hackathon, according to a NDTV report.

"In the same conditions in which the Election Commission is holding its challenge, AAP will demonstrate its own machine, which we declare is tamperable. We are inviting political parties and all experts in the world to come," Bharadwaj was quoted as saying.

Notably, Bharadwaj held a live demo of tampering a prototype EVM at the Delhi Assembly in May.

While AAP was the most vocal with their ‘tampering’ allegations, they declined to participate in the EC challenge, stating that the rules are too restrictive.

The EC said that only those parties, national and regional, that took part in the recently concluded assembly elections can hack the EVMs.

The poll panel said that the EVMs need to be picked from its warehouses in Delhi at parties' own cost.

Each political party was allowed to pick at least four EVMs of their choice from any four polling stations out of the five poll-gone states. The EVMs involved in the election petition or those sealed will not be allowed in the hackathon.

The poll panel said that if the EVM becomes non-functional after the tamper attempt or if the tamper result is same as the one put out by EC or if the challenger violates the rules-set, the challenge will be struck down.