Pande, who was serving as VC of Army Staff is the first-ever officer commissioned into the Corps of Engineers to become the Army chief 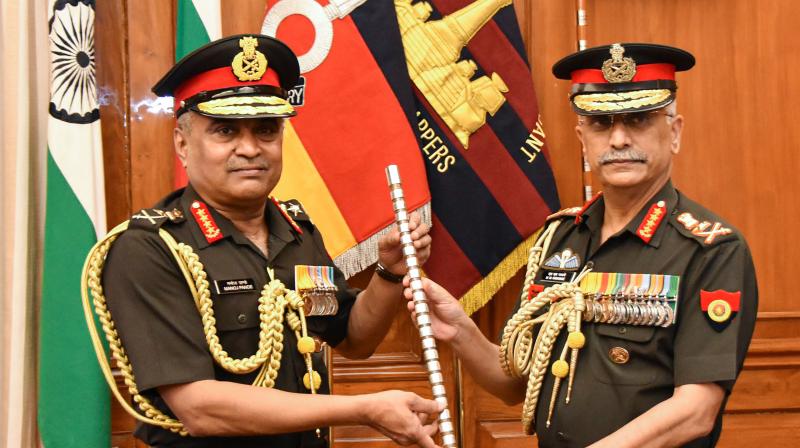 New Delhi: General Manoj Pande, on Saturday took over as the 29th Chief of Army Staff, following the superannuation of General M.M. Naravane. General Pande, who was serving as Vice Chief of Army Staff is the first-ever officer commissioned into the Corps of Engineers to become the Army chief. The top position has been traditionally held by officers from fighting arms of the Indian army: Infantry, Armoured and Artillery.

General Pande, is taking over at a time when India is in a military stand-off with China since the past two years in Ladakh sector.

Chinese military has also been rapidly building up its infrastructure all along the Line of Actual Control and has deployed heavy weapon systems and its troops at advance positions. The current Russia-Ukraine conflict will also result in heightened geopolitical tensions.

He will also have to coordinate with the Indian Navy and the Indian Air Force on the government’s plan to roll out theatre commands. The theatre commands were to be carved out by Chief of Defence Staff (CDS) in coordination with army, navy and Air Force. However, there is still no clarity when government will appoint the next Chief of Defence Staff (CDS).

Gen Pande had previously headed Indian Army’s crucial Eastern Command looking after LAC with China in North-East and has also served as Commander-in-Chief of India’s only tri-services command Andaman and Nicobar Command (CINCAN). He was the senior-most officer after the retirement of Gen Naravane.

In his 39 years of military career,  Gen Pande has tenanted important and challenging command and staff appointments in different operational environments.

Born on May 06, 1962, Gen Pande was commissioned on December 24, 1982 in the Corps of Engineers (The Bombay Sappers) of the Indian Army. He is an alumnus of National Defence Academy and has undergone courses at Staff College, Camberley (UK), Army War College, Mhow and National Defence College, New Delhi.

He has held Command of an Engineer Brigade in the Western Theatre, as part of Strike Corps and an Infantry Brigade along with Line-of-Control in Jammu and Kashmir. The other important Command appointments include a Mountain Division in the high-altitude area of the Western Ladakh. He has also served as Chief Engineer in the United Nations Mission in Ethiopia and Eritrea. He has also held the post of Additional Director General in the Military Operations Directorate at Army Headquarters, Chief of Staff Headquarters Southern Command and Director General Discipline Ceremonial and Welfare at the Army Headquarters.