India   All India  01 May 2019  Viral video: Delhi woman says women in ‘short dresses deserve to be ‘raped’
India, All India

A widely-shared video shows the women cornering the older woman and threatening to make her 'viral' if she did not apologise. 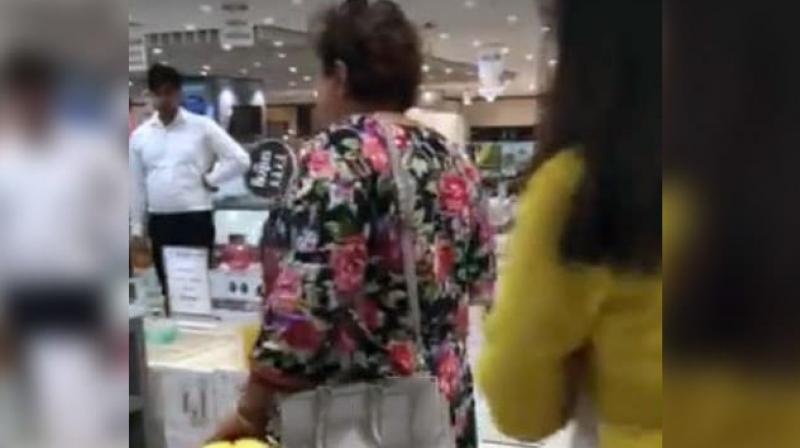 The video shows that she refused to talk to them and asked the store staff to call the police. (Photo: Screengrab)

Gurgaon: A group of young women in Gurgaon confronted middle-aged woman after she allegedly asked men at a restaurant to rape them because one of them was wearing a short skirt. The group accosted the woman at a store and demanded an apology from her.

In the video, the women cornered the older woman and threatened to make her “viral” if she did not apologise.

The video shows that she refused to talk to them and asked the store staff to call the police.

"This middle-aged woman you’ll see in the video addressed seven men at the restaurant to rape us because she felt we deserved it for wearing short clothes and bashing her unsolicited opinion...Our instinct was to turn away from the drama but supported by our colleagues, we took her on at a shopping centre, nearby. We gave her the chance to apologise, to no avail, of course. Nothing moved the needle for her, not even another woman who learned the story on the spot and implored her to apologise," claimed Shivani Gupta on Facebook, along with a nine-minute plus video of the confrontation.

After the incident in the restaurant, the young women led the woman to a shopping centre nearby where they insisted that she apologise.

One of the women, in the video can be heard saying to the older woman: “Apologise right now. I will make your life a living hell if you don't apologise, I promise you that. I will make you viral.”

The middle-aged woman, whose details are not known yet, tried to walk away and refuse to apologise.

After about eight minutes of being followed, the woman spoke up. "Hello guys, these ladies want to wear short to short dress to encourage all to see them. Theek hai? Wow, very good. All the ladies wear the shorter dress or naked to (be) raped. Hi all, if you are the parents, please control the girls (sic)," she declares, looking into the mobile phone camera.

More than 2,000 people commented on the video.